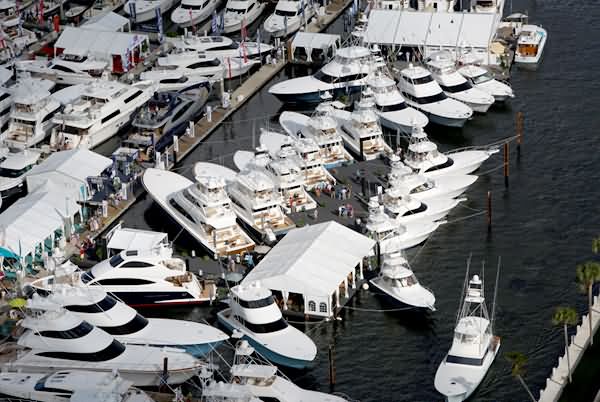 Viking Yachts presented an impressive display of 16 yachts, ranging 42’ to 92’, at this year’s Fort Lauderdale Boat Show held on 3-7 November at the Bahia Mar Yachting Center. The shipyard has premiered four new models, namely with the Viking 72 Convertible, which features a 209-square-foot cockpit with an observation mezzanine and a large flybridge with a centerline helm. Accommodations include a four-stateroom, four-head layout with private access for the crew. Also on display was the Viking 72 Enclosed Bridge Convertible, which offers similar accommodations and a climate-controlled helm with the semblance of a fully-outfitted second saloon. Both Viking 72s are powered with MTU Series 2000 V16 M96L 2,635-mhp diesels delivering a 35-knot cruise and top speeds in excess of 40 knots.

The new 48 Open and the 48 Sport Tower were also among the boat show launches. Each boat utilizes the resin-infused hull of the 48 Convertible, which was introduced last year, with freshly styled exterior profiles and new features. The 48 Open is an express style with a fibreglass wraparound windshield, fibreglass hardtop and a Costa Clear side enclosure. The 48 Sport Tower has a three-sided fibreglass deckhouse. Both boats have cockpits with split mezzanine seating, a command bridge with three pedestal helm chairs and dual dinettes aft, and a two-stateroom interior layout.

Each boat is outfitted with tuna towers designed by Viking subsidiary Palm Beach Towers, and electronic and entertainment packages by Atlantic Marine Electronics, another company subsidiary.

Our Sales Director Richard Allen visited the boat show and Viking factory in New Gretna, New Jersey and he will file a report in the next edition of our monthly news.

If you would like to discuss having your own sleek and muscular Viking yacht, please contact us at Viking@simpsonmarine.com

Viking
Share This
Previous
Back to all news
Next

Viking 58 Convertible to debut at FLIBS, with impressive Viking line-up on display at the show

Viking 58: The Next Generation of Convertible Excellence