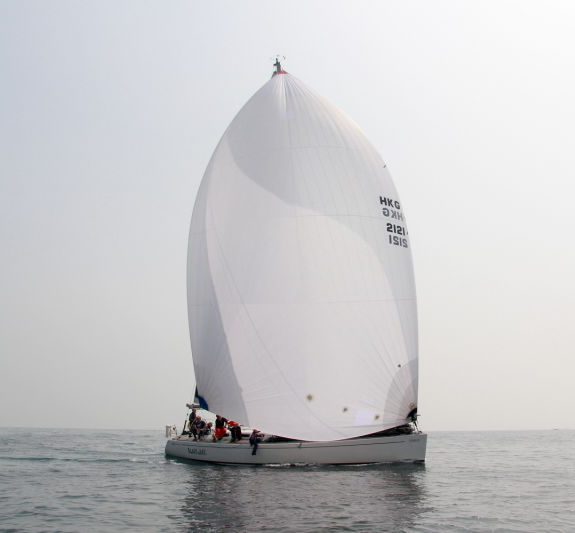 On 4 March, competitors of the Simpson Marine Four Peaks Race gathered on the Aberdeen Boat Club’s patio, looking out at the famous Jumbo Floating Restaurant, to fete the prize winners and share war stories.

As usual the atmosphere was terrific, the camaraderie of being a ‘4 Peakser’ worked its usual magic. Everyone there, whether a newbie or one of the old hands who has been coming back for years, knew they’d been part of something special and become part of the history of “Hong Kong’s best yacht race.”

Commodore Chris Pooley (a competitor on The Farr Side) kicked things off by introducing Richard Allen, Simpson Marine’s Group Sales Director and keen yachtsman. Richard welcomed everyone and reiterated Simpson Marines strong commitment to Beneteau and to supporting the Four Peaks race.

Unusually the running prizes were awarded first. The first winner being called out wasBlackjack’s Yvonne Wong who won the prize for the fleetest running lady. The prize for completing all three of the peaks went to Tsang King-ho of the veteran Nicholson 33 Golden Delight.

Red Kite II took first in the combined Division A result. First in Div A1 IRC. First in Div A1 HKPN and two running prizes. It was a decisive victory. Division A2 was won by race veteran, the vintage Farr 38 The Farr Side. Not content with being the boat that has done the most Four Peaks Races, a total of 11 times, they also won the Geriatric Jug for the oldest average age of the crew – a surprisingly modest 49.2 years old.

With the prize giving over, everyone settled to swapping more war stories about races past and present, and to begin plotting next year. It was an epic Four Peaks Race. Always different. Always a challenge. Always the best race on the calendar. Roll on 2017.

Events
Share This
Previous
Back to all news
Next