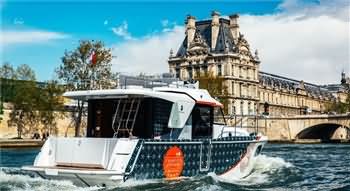 For the past month the new Beneteau Swift Trawler 30 had crossed France from North to South along the rivers and canals travelling for over 1,400 km between Deauville and Sète.

The Swift Trawler 30 is not only a boat for high seas, but also a very suitable yacht for inland waterways, as she can pass through locks and under the bridges. Throughout her voyage the ST30 made five gourmet stopovers, during which Guy Lassausaie, Meilleur Ouvrier de France in 1993 (Best craftsman in France – official honorific title for the very best  craftsmen in different domains) and owner of his own 2 Michelin star restaurant in Chasselay came on board and cooked a special Gourmet Trawler menu for guests. A perfect combination of France’s famous cuisine with Beneteau’s building excellence.

+ Load more
Events
Share This
Previous
Back to all news
Next

CNB Celebrates 30 Anniversary in Bordeaux in all its glory