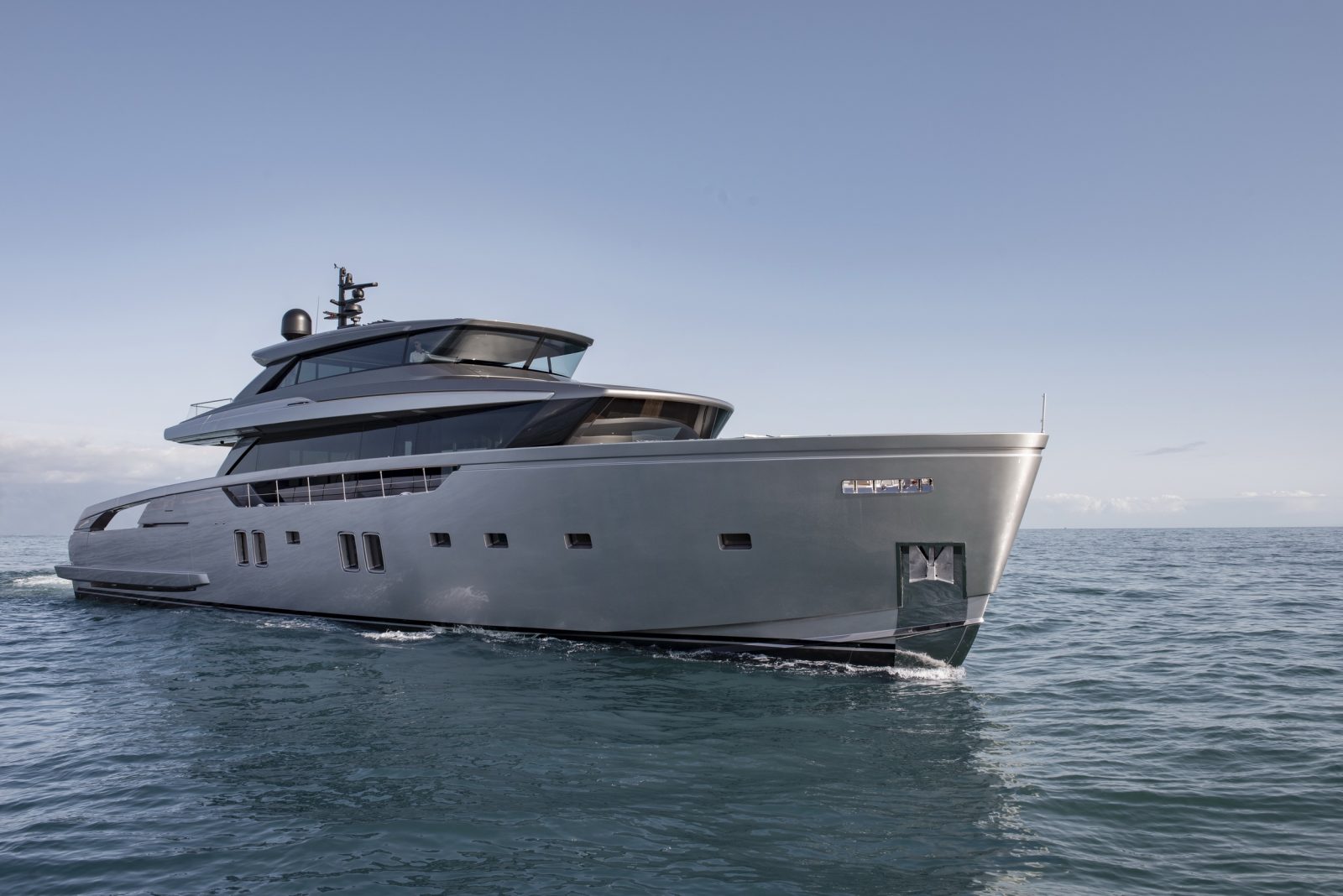 Sanlorenzo SX112: the sea on board

Unexpected openings which connect the yacht to the sea, astonishing design solutions and unique details for a yacht capable of introducing a brand new way of living on board 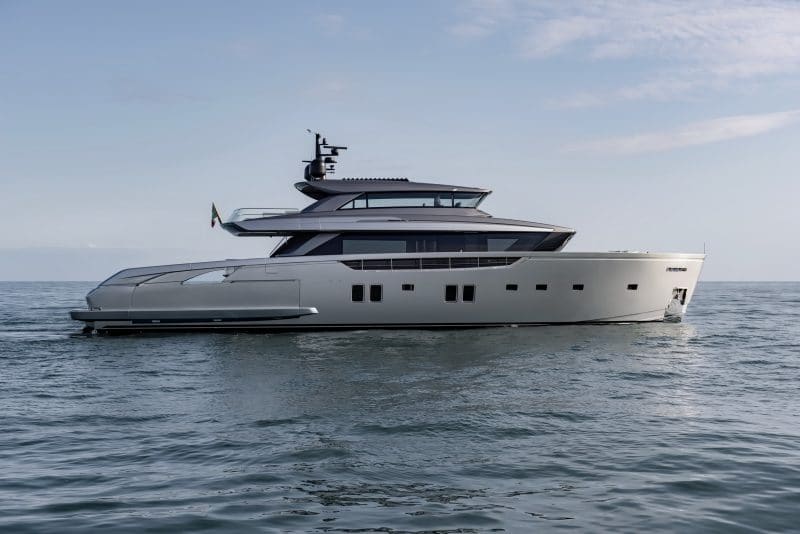 The high bow, the elegant lines, lightness and that unmistakable slender profile which descends towards the stern, as if to challenge the sea, these details immediately bring to mind exploration yachts: the SX112 delivers all the characteristics and stylistic features of the SX line taking research into new living solutions to a higher level.

The SX112 is the flagship of the innovative SX crossover line, which has broken the mould by offering a new type of yacht on the market. A synthesis of the classic motor yacht with a flying bridge and explorer type, the SX range is a proposal where style and functionality merge into a common language. 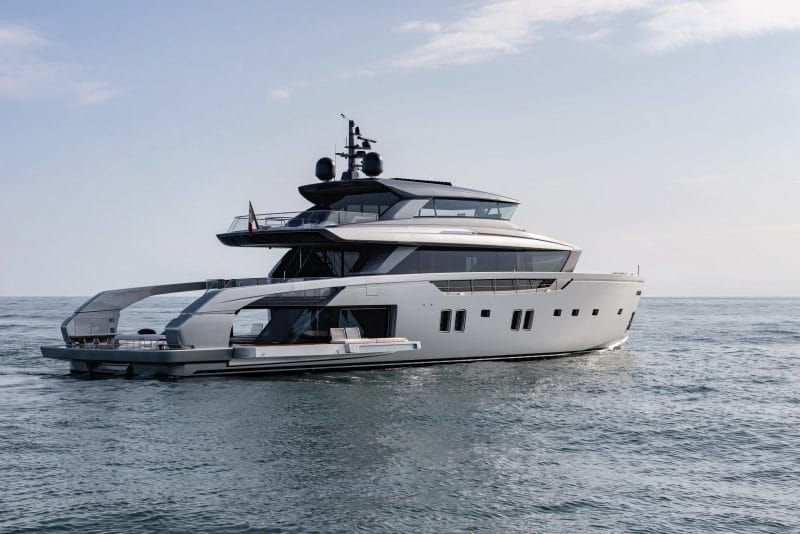 “The SX crossover range is Sanlorenzo‘s perfect example of profound sartorial aptitude. A line that was born from the constant dialogue between the company and its’ owners and that has led to the creation of a project never seen before in the yachting world, to meet the new needs of a constantly evolving market. A range of yachts that favours the use of the boat at sea, designed for true yachting enthusiasts.”

The SX112 represents the consolidation of a journey that began with the SX88 and then the SX76, a challenge that continues and is enriched with new content, and which aims to offer a new way of experiencing the sea: on board barriers fall away and the boat opens up to the outside world, entering into a relationship with the marine habitat. 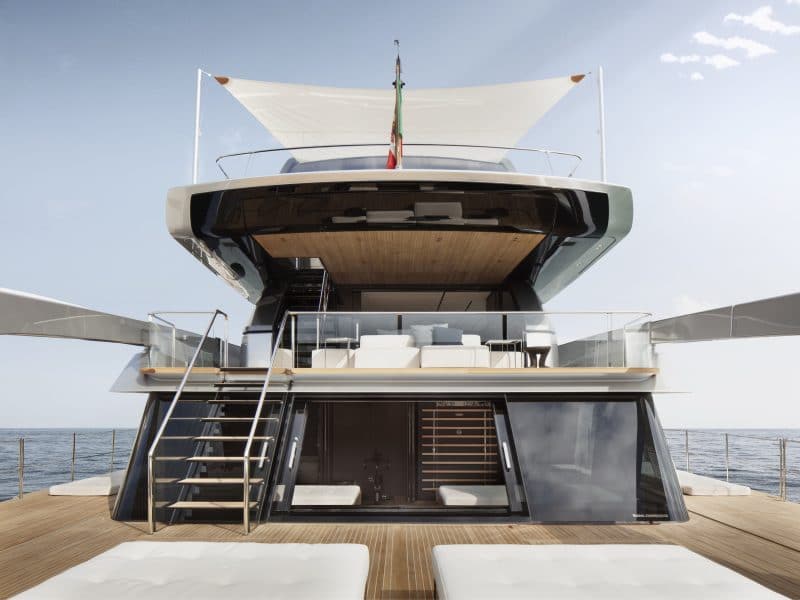 The focal point of the project is the new stern area, which is undoubtedly the yacht’s iconic space, a choice that gives the project new propositions and living perspectives, the brainchild of the architect Luca Santella, who also came up with the concept for the innovative SX crossover line.

A conceptual refinement of the SX88 project, this new model offers a spacious beach area of about 90 square metres, which can be extended thanks to the fold-down terraces, consisting of an indoor space, with a gym area directly connected to the outside, through large sliding glass windows that allow owners to enjoy these spaces in a new way, maximising the connection between indoor and outdoor. A large platform where large toys can be hosted and which allows direct contact with the sea. 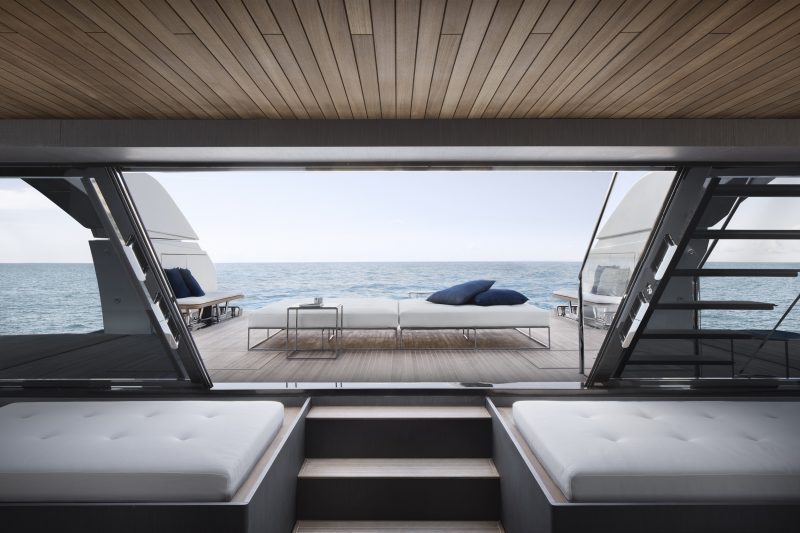 The SX112’s design is characterised by the extensive use of glass. The innovative wheelhouse, which is located exclusively on the fly bridge, can be fully closed and air-conditioned by electrically operating windows or opened to let the sea breeze in.

The main deck saloon is also enclosed by floor-to-ceiling windows that let in natural light from all sides, increasing the sense of space and allowing the view of the sea to be enjoyed at all times, thanks also to the openings in the bulwark at the centre of the boat.

An absolute innovation on the SX112 is the position of the engine room, which for the first time has been located under the stern platform, making it possible to recover 40 square metres of space on board.

The design of the new crossover model was once again entrusted to the creativity of Bernardo Zuccon, of Studio Zuccon International Project, for the exterior lines and Piero Lissoni for the interiors of the first unit.

The design studio Zuccon International Project on the one hand has been busy consolidating an image, working strongly on the concept of family feeling of the range, on the other, it has had the opportunity to strengthen some linguistic choices thanks to the extension of the yacht’s dimensions.

“On the SX112 there is more ‘oxygen’ available to convey the stylistic message, into a logic of signs where the harmony and balance of the volumes can be traced back to languages similar to the principles of organic architecture. The shapes are fluid, almost a reminder of the nature of large marine mammals. This is a product for those who really love the nature of the sea and which combines a transversal and innovative type of living space, that alters the traditional distributional balances with what are now the “must-haves” that the market demands, even on vessels with more contained dimensions.” 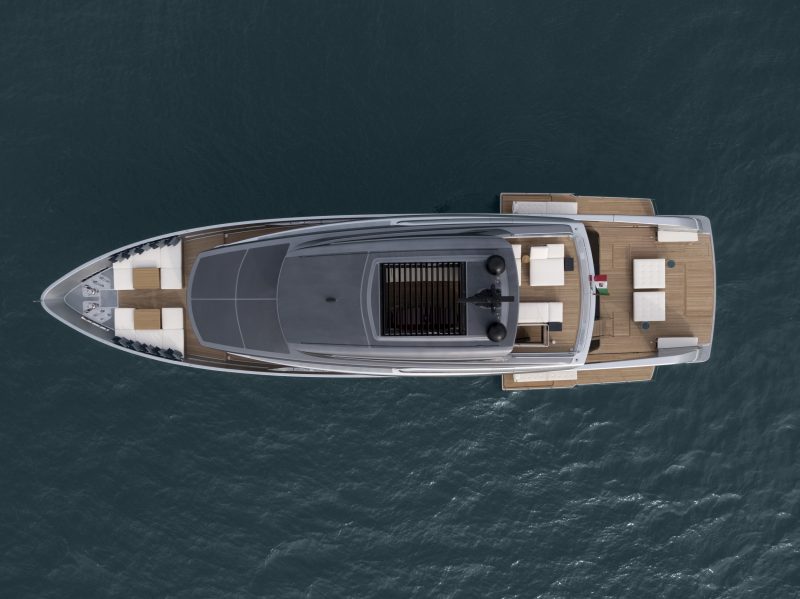 After the interior design projects for SX88 and SX76, Piero Lissoni returns to design the interiors of the SX line, devoting particular attention to the subdivision of the interior in continuous dialogue with the exterior. 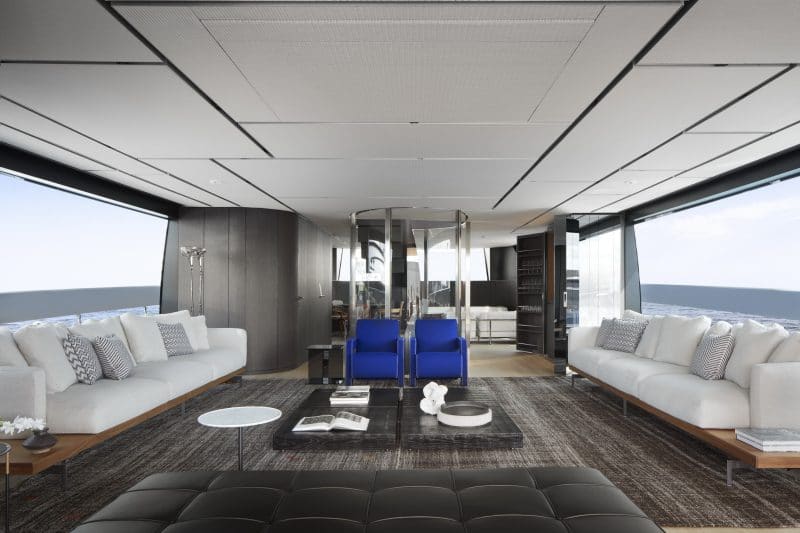 In line with the concept conceived for the other models, the main deck is designed as an open space that reinterprets the concept of areas inside the boat, developing into a single, continuous environment from stern to bow with a living area, adjacent to the bar area and followed by a dining area, seamless between inside and outside, thanks also to the large windows that overlook the sea. This innovative solution, which maximises the relationship with the open-air spaces, was introduced by Sanlorenzo for the first time on the SX88, thanks to the helm station located on the fly bridge, which keeps the area on deck free forward of the saloon, making it possible to create a single environment. 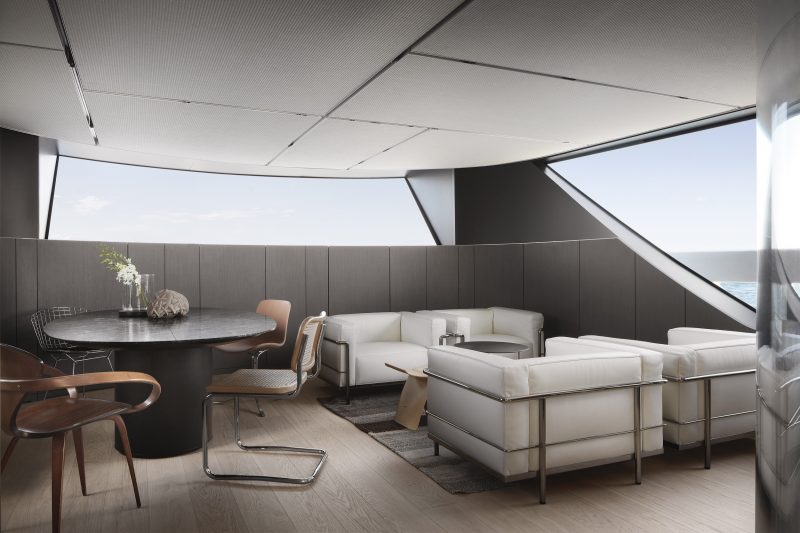 “The SX112 is another empirical model, like every new model we work on with Sanlorenzo. In this case we have brought an even more architectural attitude: it is a floating building. We have connected the spaces exactly as in a building through very technological openings that relate the inside to the outside and vice versa. In fact, we have built a villa that floats.” 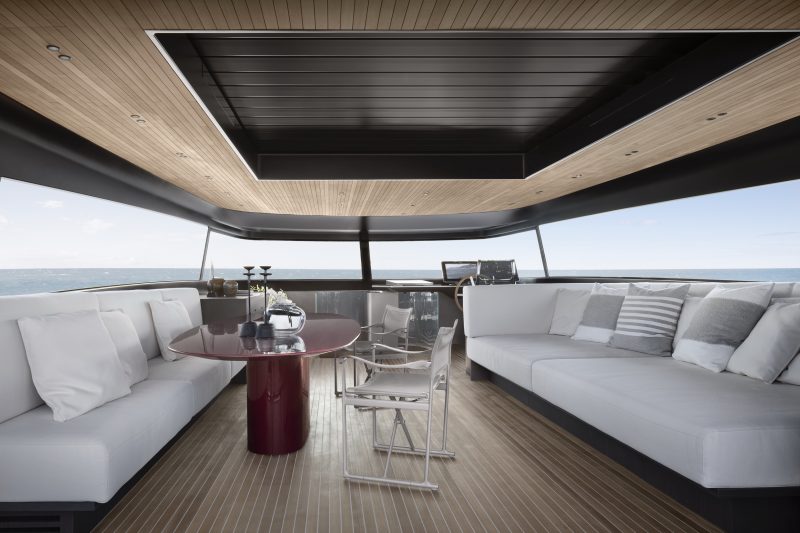 The forward area of the main deck is fully equipped to offer a living, convivial and relaxing space with a very large sun deck that can be converted into a very private and shaded dining area.

The stairs are once again a fundamental and characterising element of Lissoni’s design. The internal helical staircase is developed on three levels to connect the decks and, at the height of the main deck, is enclosed in a transparent oval volume, like a precious jewel box, that enhances it while making it appear to be suspended in the air. The external stairs, on the other hand, are requisite and have a clean design, built according to the principles of racing boats.

“The element that links all three models in the SX line is the vertical connection. Usually on boats the connections are almost always serviceable or sometimes become incredibly decorative. As an architect, I thought of inserting absolutely astonishing details into the boats, such as the stairs, which are designed specifically for each model.”

On the lower deck, the SX112 offers accommodation in three large cabins, one for the owner and two VIP cabins, plus a lounge area enclosed by wooden panelling and mirrored walls, that can be converted into a twin or double cabin. On the lower deck, there is also a kitchen connected directly to the crew quarters. 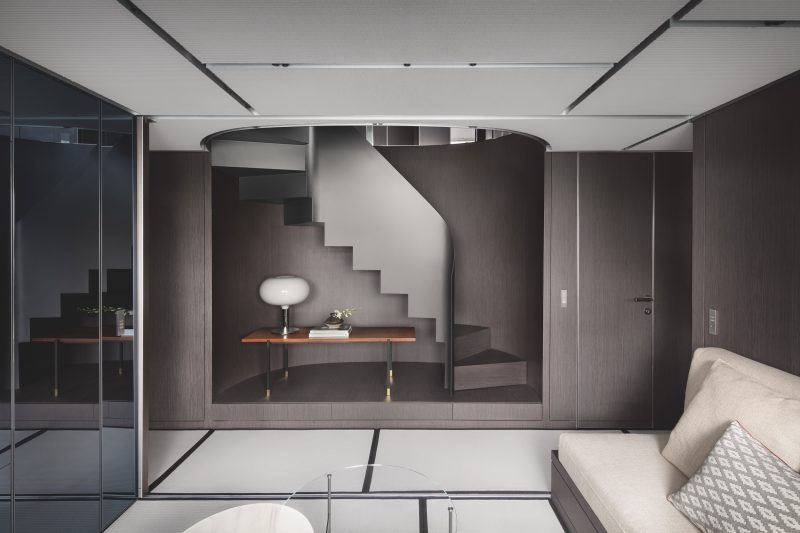 Details and materials are the leitmotif common to all the interiors, carefully chosen to combine Japanese purity with Italian elegance.

From the tatami, used both in the cabins to cover the floors and headboards of the beds and for the ceilings of the interior spaces, to the wooden walls that define the main deck and the sleeping area where it is combined with bronzed mirror walls that amplify the space. The bathrooms are adorned with the precious veined marble, while teak characterises the exteriors. 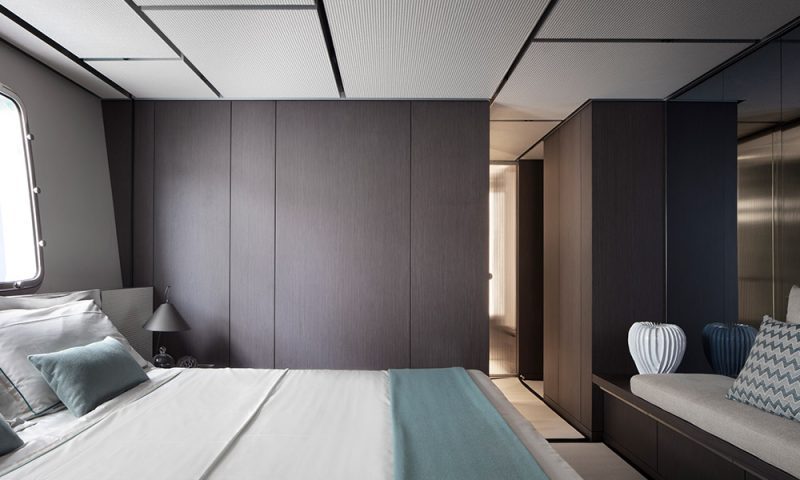 A perfect example of Lissoni’s style, combining refinement and simplicity in a space characterised by soft, neutral colours, flooded on all sides with natural light to create a warm, private atmosphere. This is aided by the counter-trend decision not to adapt the furnishings to the spaces but to arrange them freely, as in a home where design proposals, icons of the great masters and objets trouvés are combined in the name of maximum contamination.

With the new SX112 crossover yacht, Sanlorenzo once again focuses on the concept of liveability through solutions that allow all spaces to be lived in freedom. A project made possible by that unique combination of creativity, research, industrial perfection and craftsmanship that has rendered Sanlorenzo world-class excellence.

To enquire about Sanlorenzo yachts in Asia, contact our team at sanlorenzo@simpsonmarine.com .

Sanlorenzo SX112
Share This
Previous
Back to all news
Next