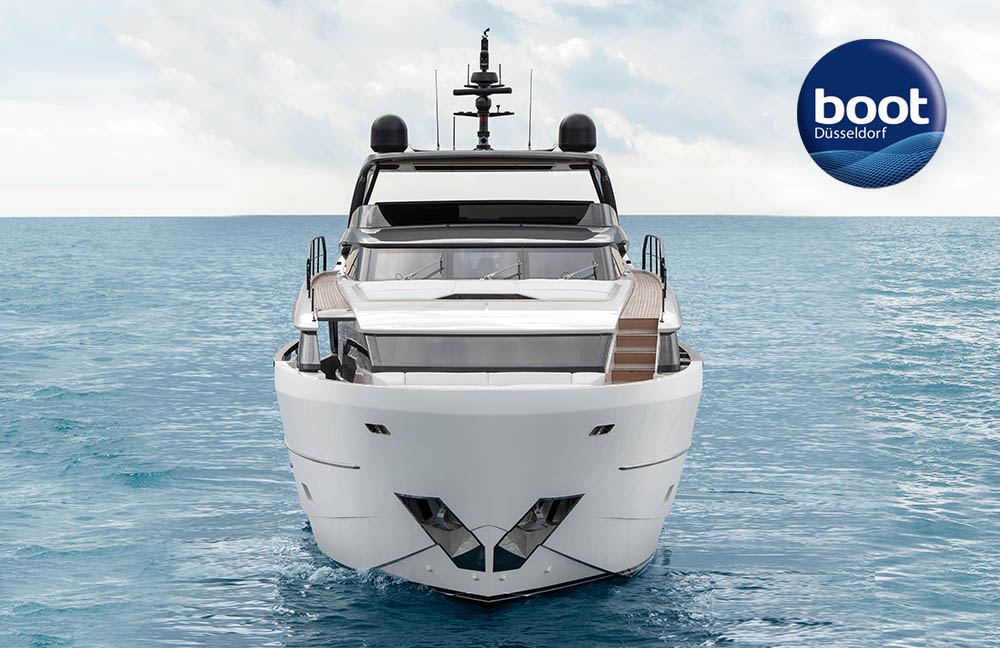 Consolidating the progress that began with the SL102Asymmetric, the world’s first asymmetric yacht launched in 2018, Sanlorenzo, with this new creation, confirms its particular approach to the concept of space, shaping it each time to give rise to projects tailored to meet the desires of yachts owners.

SL96Asymmetric is proof of the vision of the decision of Mr. Massimo Perotti, Executive Chairman of Sanlorenzo, to break with the patterns of the past, moving against the current to formulate proposals never imagined before. The asymmetry makes it possible to revise conventional onboard balances, offering not just volumes previously set aside for other functions, but also and above all new living scenarios, new vantage points capable of intensifying and encouraging that innate visual, physical and emotional bond that exists between human beings and the sea.

One of the world’s leading producers of yachts and superyacht, Sanlorenzo is ready to present a new, innovative, cutting-edge project that once again demonstrates the brand’s ability to forge beyond preset limits of nautical design in order to find new pathways, thanks to a unique combination of technology and craftsmanship and very precise design thinking: the SL96Asymmetric yacht, officially launched at Boot Düsseldorf 2020.

With the aim of achieving greater livability of internal spaces and improved communication with the outside world, the SL96Asymmetric rethinks the conventional layout of a yacht, conserving only the gangway on the starboard side and eliminating the one on the port side, which shifts to the roof of the superstructure, in an unprecedented asymmetrical configuration that frees up about 10 square meters of space for internal use. With respect to a traditional layout, this arrangement offers more space, improving luminosity and flexibility.

While the starboard side has a gangway that leads directly from the aft cockpit to the bow living area, along which the bulwark at the position of the saloon opens to form a terrace (a solution Sanlorenzo applied for the first of the 40Alloy superyachts, many years ago by now in 2008), the port side instead resembles that of a wide body vessel: the side is continuous, from the waterline to the flying bridge, because the gangway created on the roof of the superstructure flanks the flying bridge at the same level, and then descends into the dinette and sundeck area at the bow by means of a staircase. Also to starboard, at the height of the dining area, part of the side can be electrically lowered to expand the panoramic outside view.

The innovative layout, however, is detected only by careful observation: the asymmetry of the SL96A is disguised by the elegant design of the sides, bearing the same features on both, and by the refined concealment of the higher gangway on the starboard side, protected by a handrail that is also seen on the port side to border the sundeck zone created on the roof of the superstructure at the bow of the sheltered wheelhouse, a solution known as a raised pilothouse.

The two passages to the bow – the higher one to starboard and the lower one to port – have been rendered symmetrical in their asymmetry by a chiaroscuro effect on the bow windows and the roof of the superstructure, requiring close attention on the part of the observer to decipher the volumes, passages and movements.

The asymmetric concept is the result of a meeting of different creative minds. From an original idea of Chris Bangle, the brilliant car designer, to the in-house technicians and designers of the shipyard, and then to Bernardo Zuccon, the young architect from a family of yacht designers, who together with the studio Zuccon International Project is creating many projects for Sanlorenzo.

“Every project always begins by sharing an idea that represents a synthesis between the designer’s sensibility and the customer’s desires. In this case the input was clear: to continue along the design path that began with the SL102 experience, setting ourselves the goal of preserving the stylistic features and language that characterized the first product, while reworking them to give the new direction the identity necessary to add strength and credibility to range choices.” – Bernardo Zuccon

SL96Asymmetric is a synthesis of languages, places and functions, a life container that is able to transform and adapt to different dimensions and ergonomics, changing onboard circulation to offer new opportunities for utilization of spaces in everyday life, without implying compromises for the yachtsman and conserving stylistic features to make the yacht a living, integral part of the Sanlorenzo brand identity.

The interior design by Laura Sessa

The interior design has been done by the architect Laura Sessa, chosen for her ability to translate the “made-to-measure” philosophy of Sanlorenzo into an effective project with a personal touch.

“My job is to transform the dreams of clients into reality. As an interior designer, for me it is important to translate the requirements of clients into an elegant, harmonious design, in the spirit of eurythmy between exterior and interior. For this reason, I develop every project in close contact with the yachtsman, monitoring every phase from start to finish.” – Laura Sessa

A forceful sense of unity and coherence emerges in the interior design thanks to the choices of materials and finishes that are uniformly developed in all the spaces. The selected colors are those of the Mediterranean, a distinctive characteristic of the projects of Laura Sessa. The simplicity of the internal panels permits great flexibility, offering clients the possibility of choosing from a wide range of different materials.

The strong point of the yacht is the living area on the main deck, featuring a new layout that generates greater internal space: the asymmetry makes it possible to position an ample dining room on one side with a full-height glazing directly facing the sea, and a lounge that opens onto a balcony on the opposite port side. This enables the spaces to take full advantage of the light from the lateral windows and the aft zone.

Another distinctive feature is the use of mirrors in the lobby to augment the perception of the interior space.

SL96Asymmetryc offers 4 cabins with private bathrooms: 2 guest cabins and the VIP cabin on the lower deck, and a master cabin on the upper deck. The VIP cabin, with the same characteristics as the master suite, provides a private bathroom that opens completely with sliding mirror doors to create a perspective effect of depth, while at the same time offering an appropriate level of privacy.

The master cabin stands out for its organization on two levels: at the main deck it contains a bathroom (with the same design as that of the VIP cabin) and the nighttime zone, while the open dressing room is placed in the lower portion, exploiting the brightness that enters through a skylight. The slatted headboard has been designed to create a connection between the two spaces.

Sanlorenzo SL96 Asymmetric
Share This
Previous
Back to all news
Next