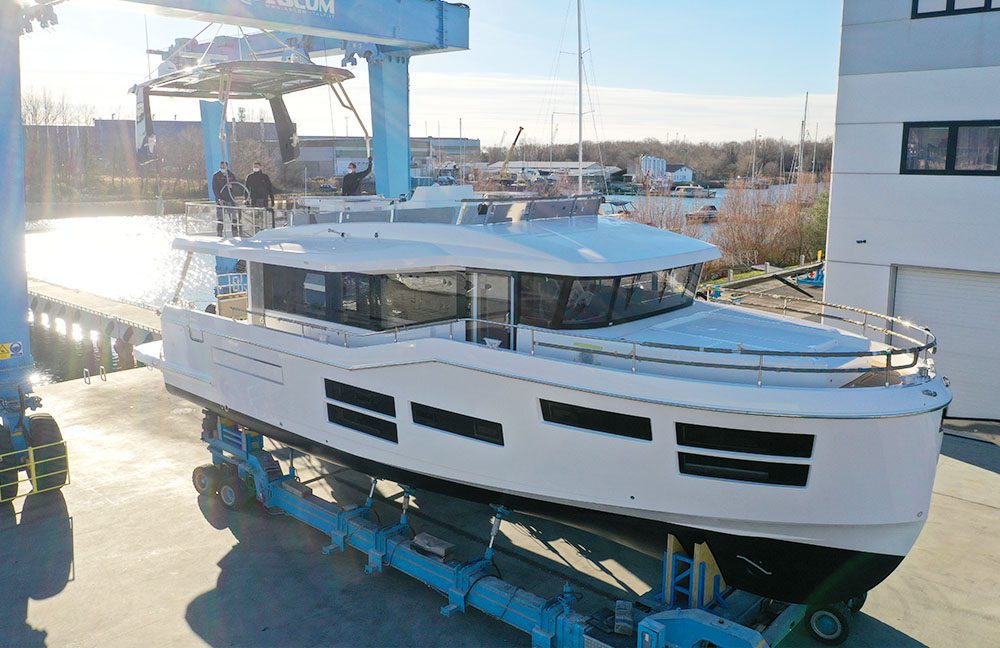 Beneteau has expanded the scope of the brand’s iconic Swift Trawler line with its first model from the new collection – the Grand Trawler 62. This unique powerboat range was developed for long-distance cruises in comfort and safety. Dubbed “Project E”, the mock-up of the owner’s cabin was presented during last year’s Boot Düsseldorf boat show, inspiring this new flagship line for the brand.

The Grand Trawler 62 is built in the state-of-the-art Monfalcone shipyard in Italy with a VIP weekend factory tour on schedule for interested buyers. The Beneteau team expects to start hosting customers on sea trials in mid-April in Italy, with a series of webinars for the press in the region to allow further sharing of the Grand Trawler 62 design, ideas, features, concept and highlights.

At 19-metres long the new model is the result of a successful collaboration between MICAD Naval Architecture Office and Nauta Design. She boasts a cruising range of 900nm with 10% fuel reserve and a cruising speed of 9 knots, thanks to her full-displacement hull specially designed by MICAD to upgrade the cruising range and efficiency.

The expertise of Nauta Design has helped to increase the feeling of space, comfort and elegance onboard. A raised helm station with cutting-edge equipment offers spectacular views across the ocean and the internal stairway from it leads directly to the 31㎡ flybridge, featuring a U-shaped sofa, relaxation spaces and a sun pad. She is available in two versions, with options for three or four cabins. It is worth mentioning is that the headroom in each cabin is an impressive two metres on average.

The Grand Trawler 62 will be officially launched in Cannes this September and the Asia-Pacific region can expect to witness her debut at the end of this year. For additional information and developments and to visit the existing Swift Trawlers in Asia and get to know this concept better, please email us at beneteau@simpsonmarine.com