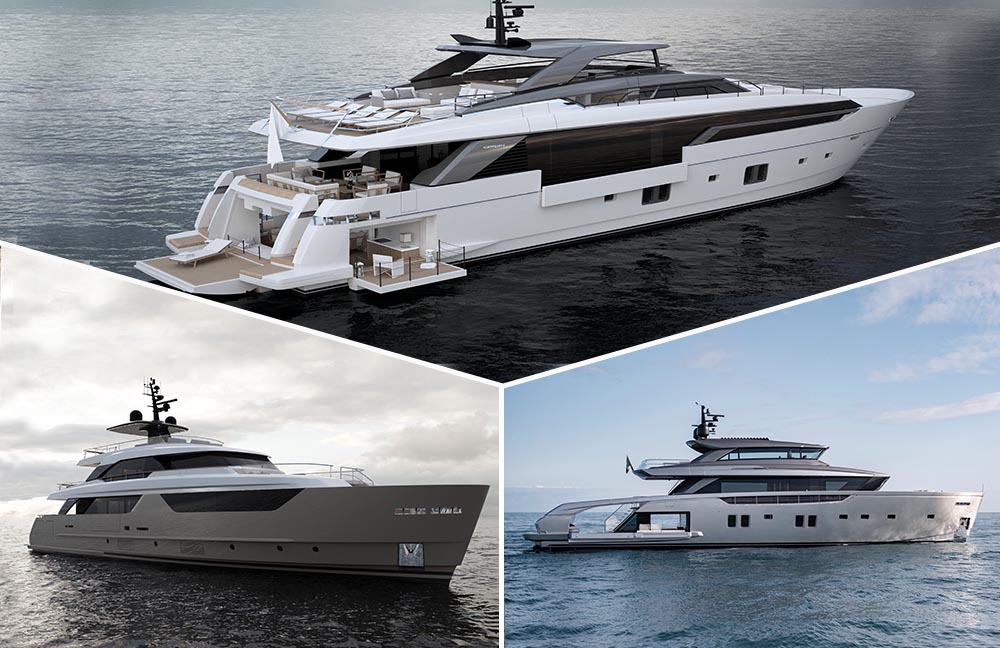 The past 12 months have proved to be very special for the Sanlorenzo shipyard which has launched three of its Yacht Division flagship models within the same year.

Late 2020 saw the extraordinary introduction of the Sanlorenzo SX112, the ultimate crossover yacht that is a smart synthesis between a classic motoryacht and an explorer vessel allowing for regional cruising in unmistakable style. Her many features include an extensive sea lounge area on the water level, allowing owners and their guests to stay close to sea and enjoy its serenity and beauty throughout the day.

The first SX112 has seen a special collaboration with Volvo Penta, which has worked hand in hand with Sanlorenzo on the SX line since 2016.  The flagship SX112 is powered by a quad installation of Volvo Penta D13 IPS1350 – the most powerful IPS (inboard performance system) that Volvo Penta produces – with 15 percent faster acceleration and 20 percent higher top speeds, compared to inboard shaft installations. The system powers the SX112 to an impressive maximum speed of 23 knots. However, speed is not everything and the SX112 can also cruise comfortably at 10-20 knots thanks to the impressive range of Volvo Penta’s IPS.

Volvo Penta has committed to making boating easy, safe, and accessible to all boat owners. Precise manoeuvrability has become common in smaller day boats but, with the new and powerful Volvo Penta IPS1350 system, larger yachts like the SX112 can now benefit from Volvo Penta’s years of experience in the field of smart propulsion.

It is the innovative design of Volvo Penta’s IPS that makes it so special. The system has forward-facing, twin counter-rotating propellers that sit below the hull for incredible ‘grip’ of the water, for unbelievable manoeuvrability. The joystick makes docking – which is considered one of the most stressful aspects of boating – easier. In the SX112, the onboard Joystick Docking function is linked to four independently operating IPS drives. These individually steerable IPSs allow the captain to easily manoeuvre the vessel in any direction, aiding safe passage between tight berths. The captain can even activate the Dynamic Positioning System for greater precision. Overall, Volvo Penta’s IPS provides superior handling and performance than a traditional inboard shaft installation and the enhanced speed, fuel consumption and manoeuvrability effect are some of the key engineering differentiators of the SX112.

Asia’s first SX112 will arrive in Hong Kong in late 2021 followed by the next delivery in early 2022. Currently already 6 units of this impressive flagship have been sold worldwide.

Soon after the unveiling of the SX112, Sanlorenzo released the flagship of the semi-displacement range, the impressive and volume abundant SD118. In testament to her immediate popularity, four units were sold even before her official announcement! The yacht bears an exterior profile and layout by Zuccon International Studio, Sanlorenzo’s long-term design partner, and interiors by the reputed Patricia Urquiola, who has already developed the SD96 together with the shipyard.

The SD118 has space for up to 10 guests across five cabins and her design balances classic and traditional lines in a contemporary interpretation, with an aesthetic centred around her wide-body hull. A standout feature of the SD118 is her upper deck, which has an asymmetrical configuration designed by Bernardo Zuccon. Previously applied only to the SL line, this configuration provides more space and flexibility of use, and a direct view of the sea from both sides. This impressive 170 GT yacht is powered by two Caterpillar C32 Acert diesel engines, which will allow her to cruise comfortably at 11 knots and reach a top speed of 19 knots. Her focus is a long range and comfort, so she is the ideal vessel to consider for enjoying regional cruises in total comfort. The SD118 yacht will officially launch at the Cannes Yachting Festival 2021 in September.

Just two weeks after the announcement of the SD118, in mid-December 2020 the shipyard unveiled their third notable flagship of the planing SL line, the SL120 Asymmetric with 4 units sold to date. Designed by Zuccon International Studio, the new SL120A takes the concept of the asymmetry displayed on the earlier SL102A and SL96A models to new heights. This 36.9m yacht is a much anticipated successor of Sanlorenzo’s incredibly stylish and successful SL118, which is already in Asia, and prioritises space, functionality and on-board liveability, while emphasising indoor/outdoor connection.

The SL120A’s asymmetrical design allows for an enhanced interior layout with large volumes. The traditional starboard side deck has been eliminated, making way for a large dining room with full height windows. The sole side deck sits on the port side of the main deck and leads to the large sunbathing area on the foredeck.

The owner’s cabin has direct access to the outdoor lounge at the bow. This is a space of 15 sqm and has been conceived for a range of different uses: while the foredeck is completely outfitted as a large sunbathing area, the upper deck features a table for outdoor dining, which can also be transformed into a sundeck. Furthermore, the C-shaped sofa facing the deckhouse can be replaced with a Jacuzzi.

The seamless connection with the sea and the liveability of the outdoor spaces reach their peak in the stern zone of the SL120A’s lower deck. The garage can be transformed into a marvellous beach club of 45 sqm, thanks to the folding terraces, offering guests direct access to the sea.

Similar to the SD118, the SL120A will be premiered at the Cannes Yachting Festival this coming September.

Three flagships introduced within a space of three months is solid proof of Sanlorenzo’s continuous quest for innovation and a dedication to answering the requests of their loyal owners by delivering yachts with that are eminently liveable and with the most advanced technologies on board.

To discover this outstanding trio of flagships by Sanlorenzo and discuss your own Sanlorenzo yacht in Asia, created especially for you and your needs, please contact our dedicated team at sanlorenzo@simpsonmarine.com