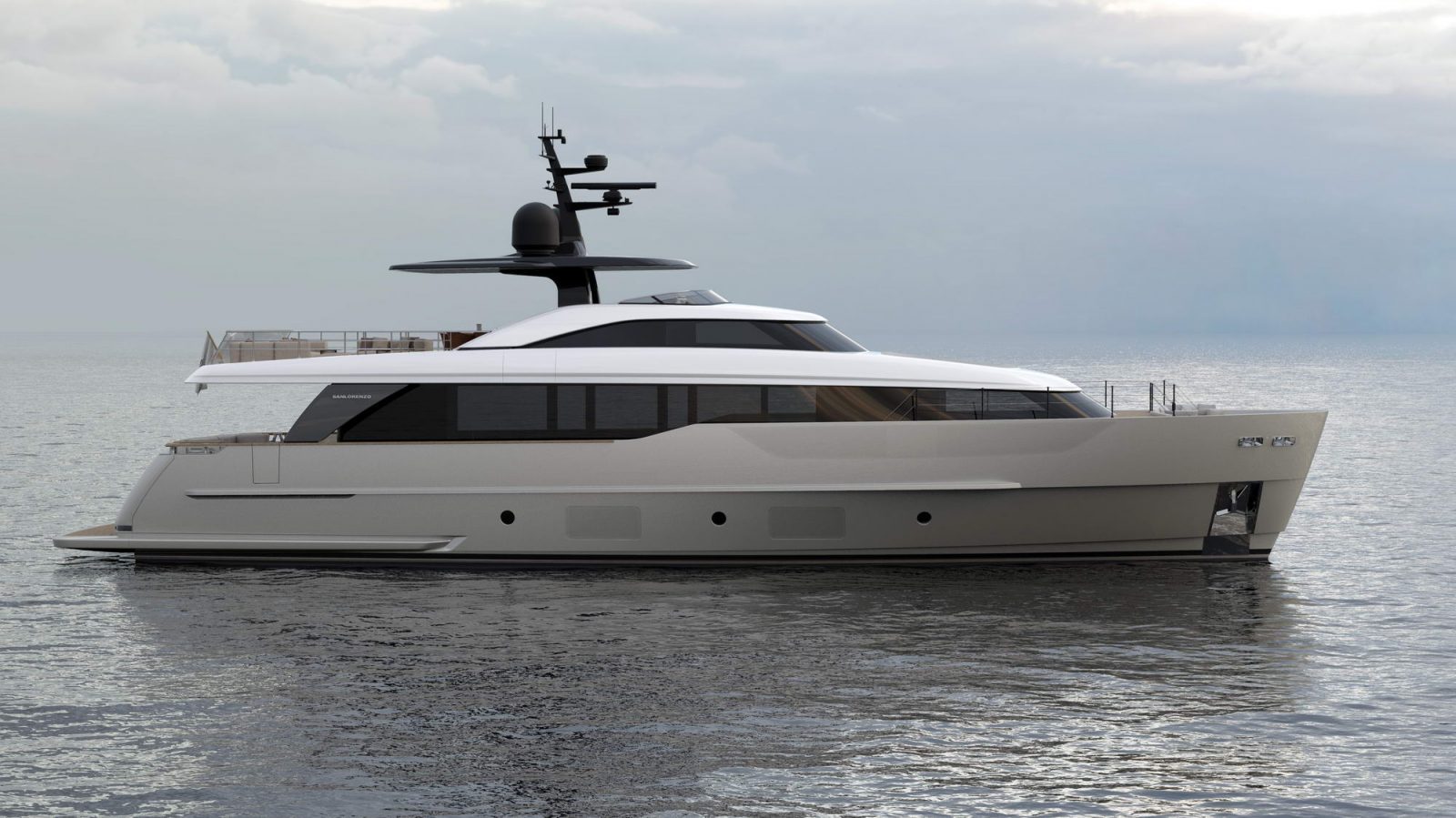 The entry-level of the revamped SD line, the yard’s range of semi-displacement shuttles, the SD90/s is the third chapter in a success story that began with the SD96 and SD118. With this new model, Sanlorenzo encloses in a smaller size a series of important features that are the result of ongoing stylistic and technological research, including hybrid motorisation, carried out by the company in an open and continuous dialogue with designers.

With a hull length of less than 24 metres and an out overall length of almost 28 metres, the SD90/s is a project that focuses on transversal technological efficiency, both in terms of resistance to motion by the hull and research into materials. After the brilliant results achieved with the optimisation of energy efficiency on the hull of SD96, Philippe Briand was also involved in the study of that of SD90/s. The geometric characteristics of the hull allow the boat to perform remarkably well both with hybrid propulsion between 6 and 10 knots and with traditional propulsion at a maximum speed of 17 knots.

The external lines of the SD90/s, curated by the Zuccon International Project studio, are the result of an articulated stylistic exercise that finds an optimal balance in the shapes, producing a product that is surprising in its volumes and design. Structured on two and a half decks, SD90/s features an open fly bridge and is configured with a lower deck, main deck. The layout is designed to guarantee maximum liveability of the yacht, as can be seen from the new solutions introduced both externally and internally, which give a totally revised perception of space compared to the other yachts in the same range.

The bow area of the main deck is conceived as a partial full beam and characterises the volume of the owner’s cabin in an unusual way, providing a more spacious area inside compared to a traditional layout.

The bow area is designed to enjoy the boat to the full in all its spaces and includes two different configurations designed to meet the desires of customers who like to relax more or those who prefer conviviality instead. The first version features a sunbathing area distributed in two areas and on two levels, while the second consists of tables, two sofas and a raised sunbathing area. Both layouts allow guests a direct view of the water, once again underlining the importance of the connection with the sea. The fly bridge is minimal, with a lounge and dining area and a very light T-top in line with the boat’s volumes.

The interior design of the SD90/s is by Patricia Urquiola who, in her third collaboration with Sanlorenzo, accepts the sustainability challenge and interprets the spaces, bringing her own vision on board with an approach closely linked to transformability.

The flexibility of the interior of the SD90/s allows the yacht to adapt to the different needs of those who live it, evolving and transforming itself through unprecedented solutions of furnishings and configurations. The layout of the saloon on the main deck makes it possible to have both a lounge and dining area, solutions typically found on larger yachts, thanks to the use of tables that can be transformed in height and comfortable sofas, an interesting choice for convivial moments.

The lower deck further represents the transformability of the SD90/s: the space in front of the descent staircase is a lounge area that, if necessary, can be closed off and become a private cabin in which the sofa is converted into a bed.

The spaces of the SD90/s are permeated by a style that strongly recalls the marine world and that in every detail seeks the maximum connection between interior and exterior. Among the boat’s salient features are the large windows, one of which remains fixed while the other opens completely, connecting the saloon with the cockpit area. The openness towards the outside is also favoured by the continuity of the flooring between the two areas thanks to the use of a parquet with oblique slats, with an innovative laying. A further key element in the design of the interior is the luminosity that dialogues in particular with the main deck ceiling, embellished with a micro-pattern that recalls the texture of the pots and creates interesting refractions when the boat is in the water.

In the design of the SD90/s great care has been taken in researching and using raw materials from alternative sources, with a view to circularity of materials. The finishes used in the yacht’s interior – such as the wood panelling clad in cannulated Paper Factor and the sustainable terrazzo used in the bathrooms – are carefully selected to ensure a lower environmental impact of the entire product. Bio-resins are used for the details of the ceilings and furnishings, while the spaces are enriched with steel profiles and machined crystal.

The saloon’s bow wall is made of recycled glass and has been designed as a translucent filter that allows a glimpse of the flying staircase at the rear, giving a vedo-non-vedo, see-through effect that does not close off the space but, on the contrary, amplifies it.

Also in the SD90/s, as in the other shuttles in the range, “One way” glazing is used to conceal the windows on both the main deck and the lower deck in order to keep the perception of the broadside intact and give the eye a minimal, uniform hull surface.