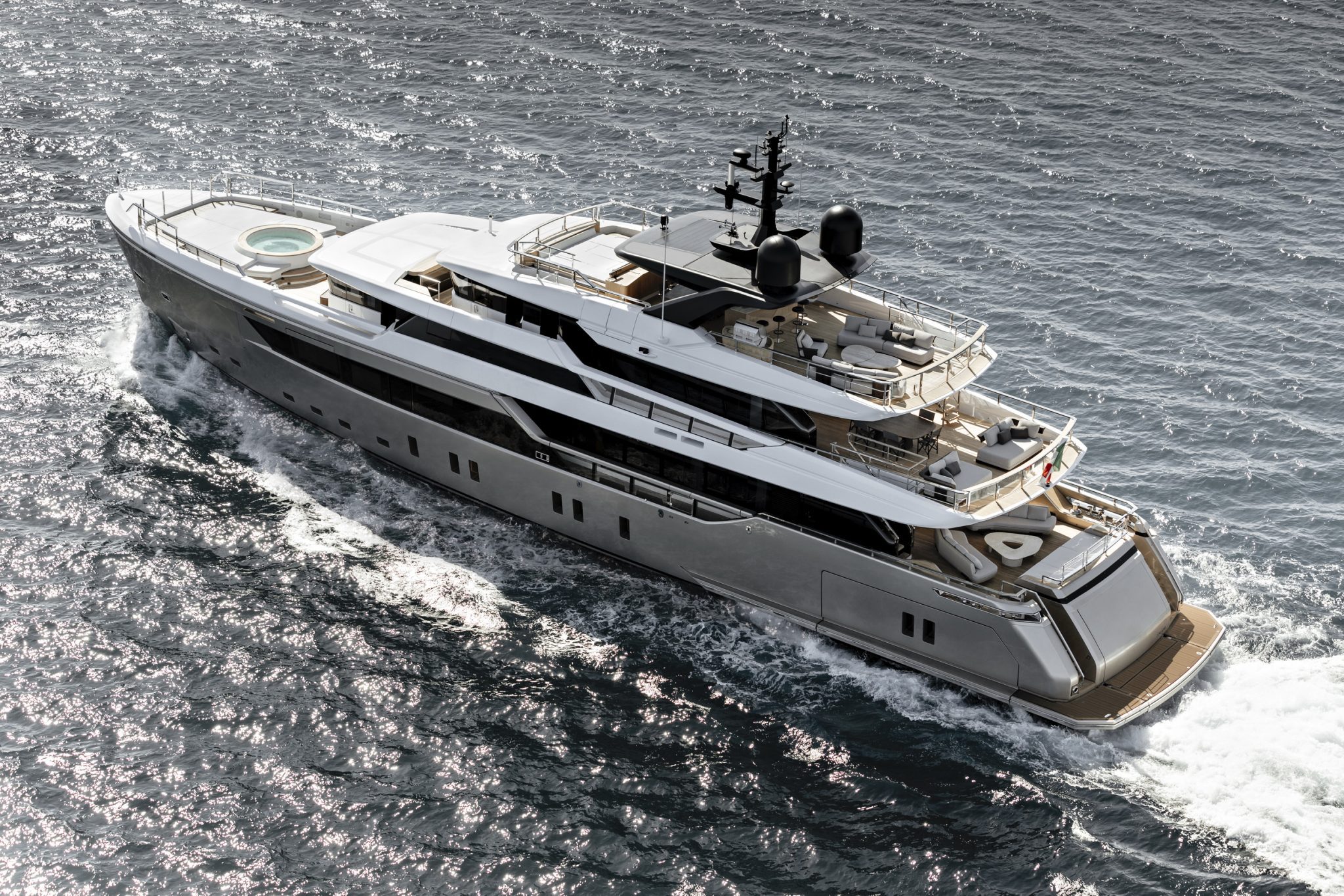 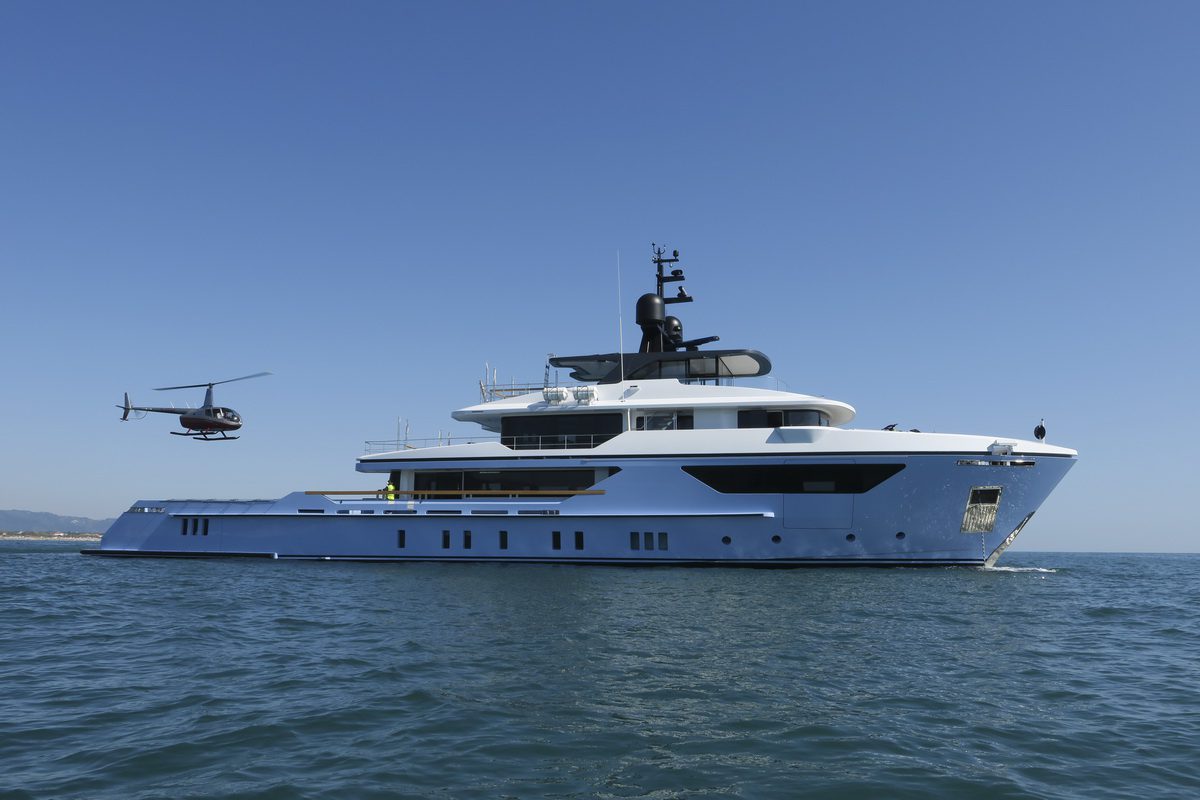 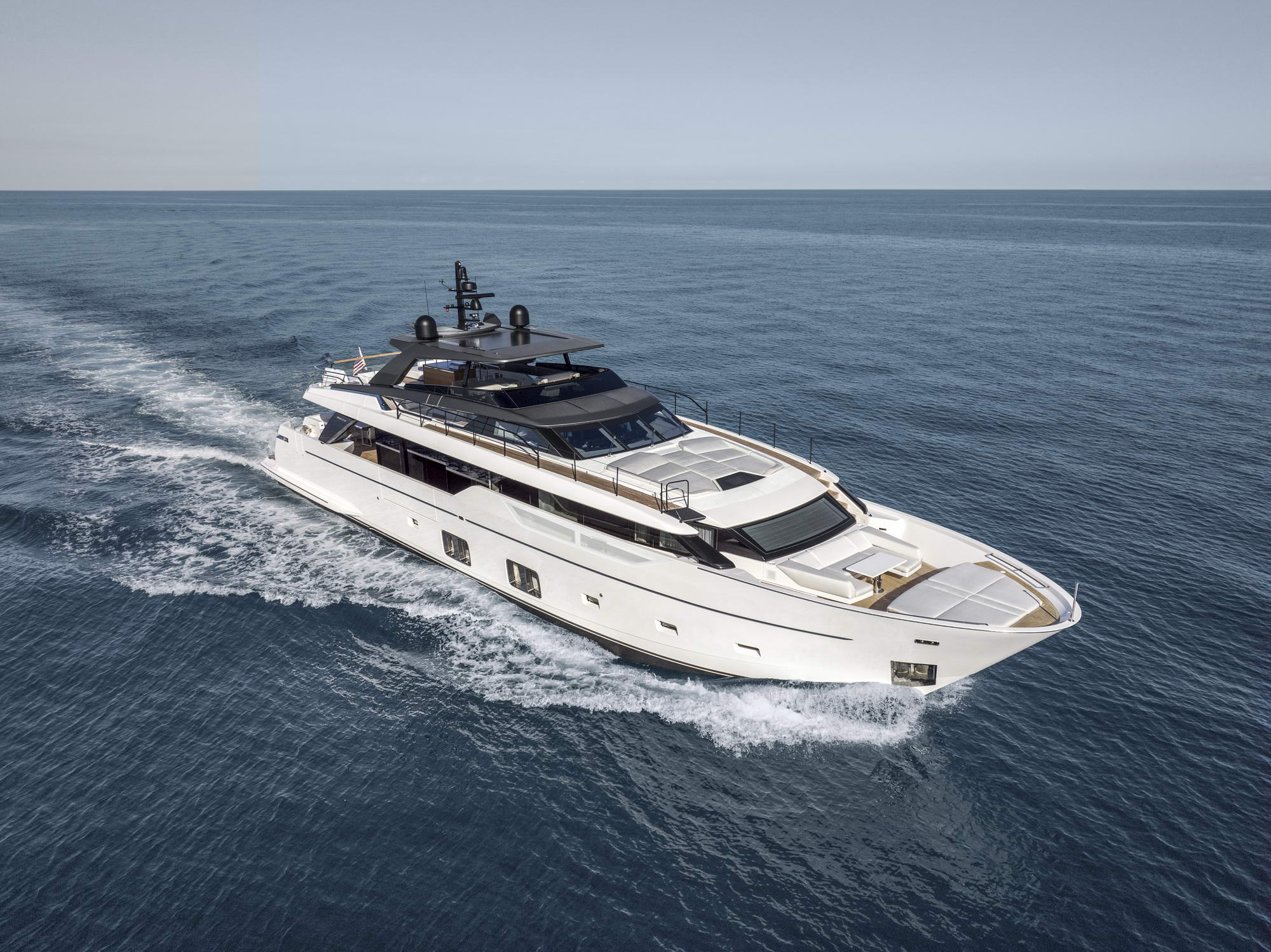 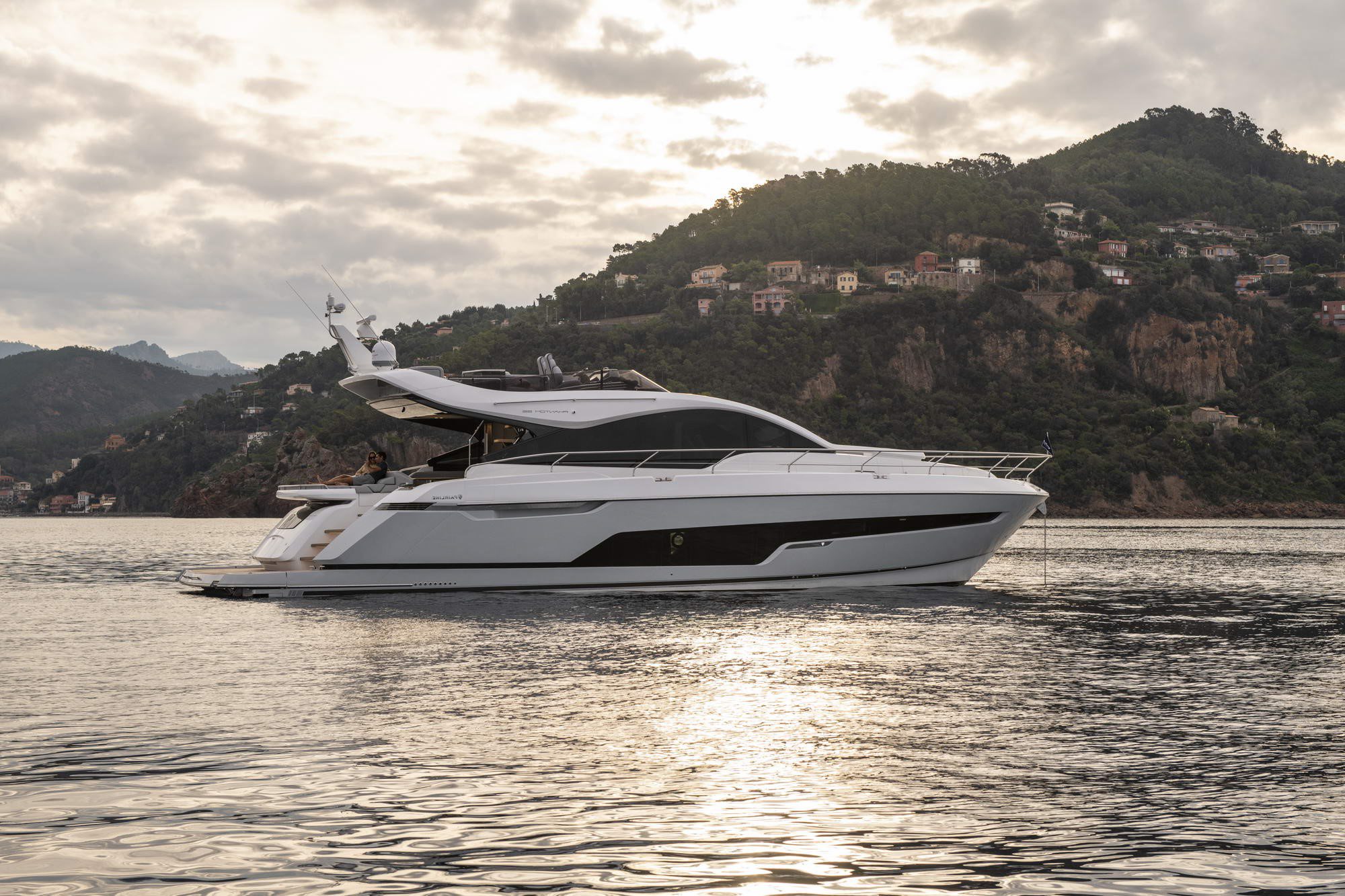 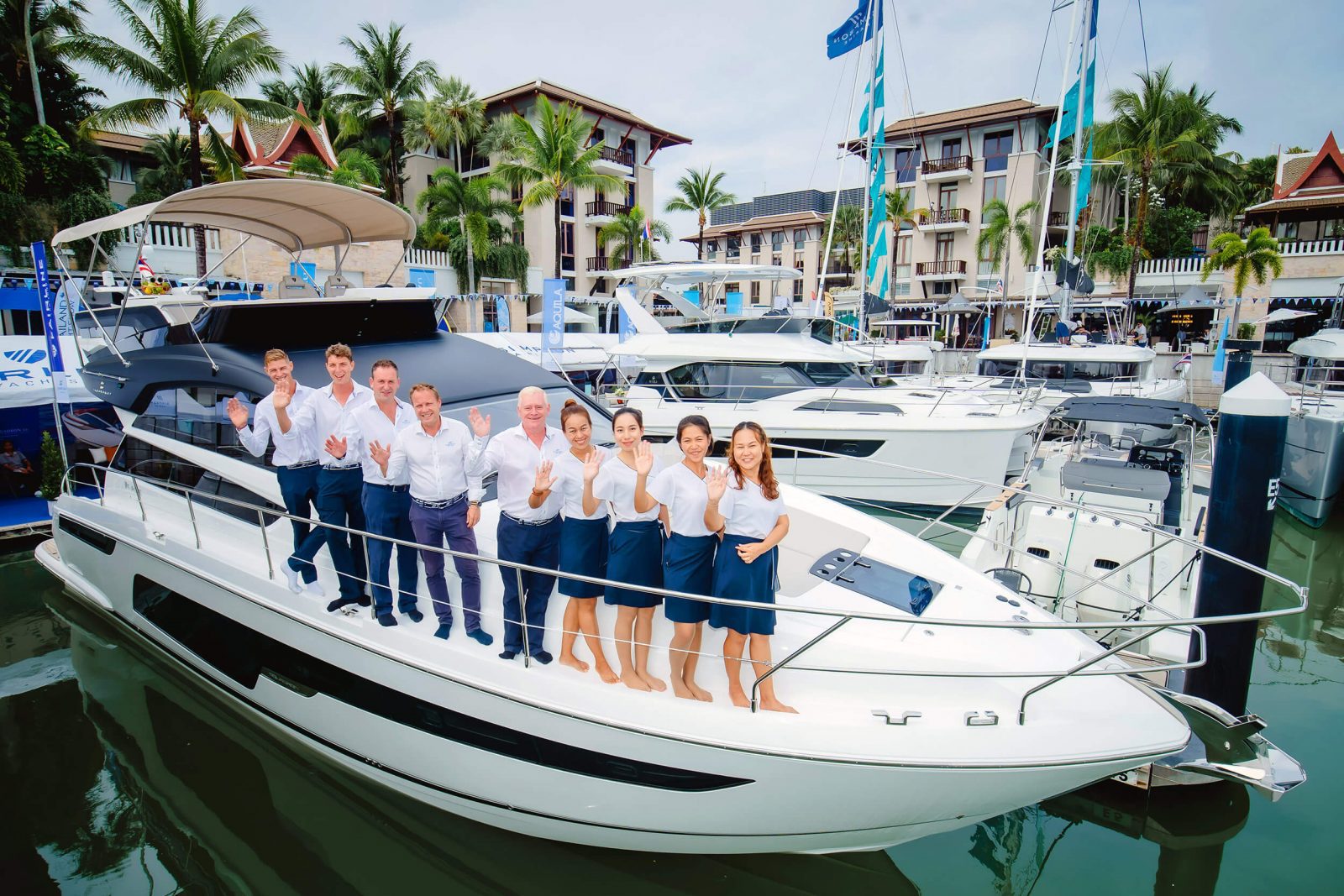 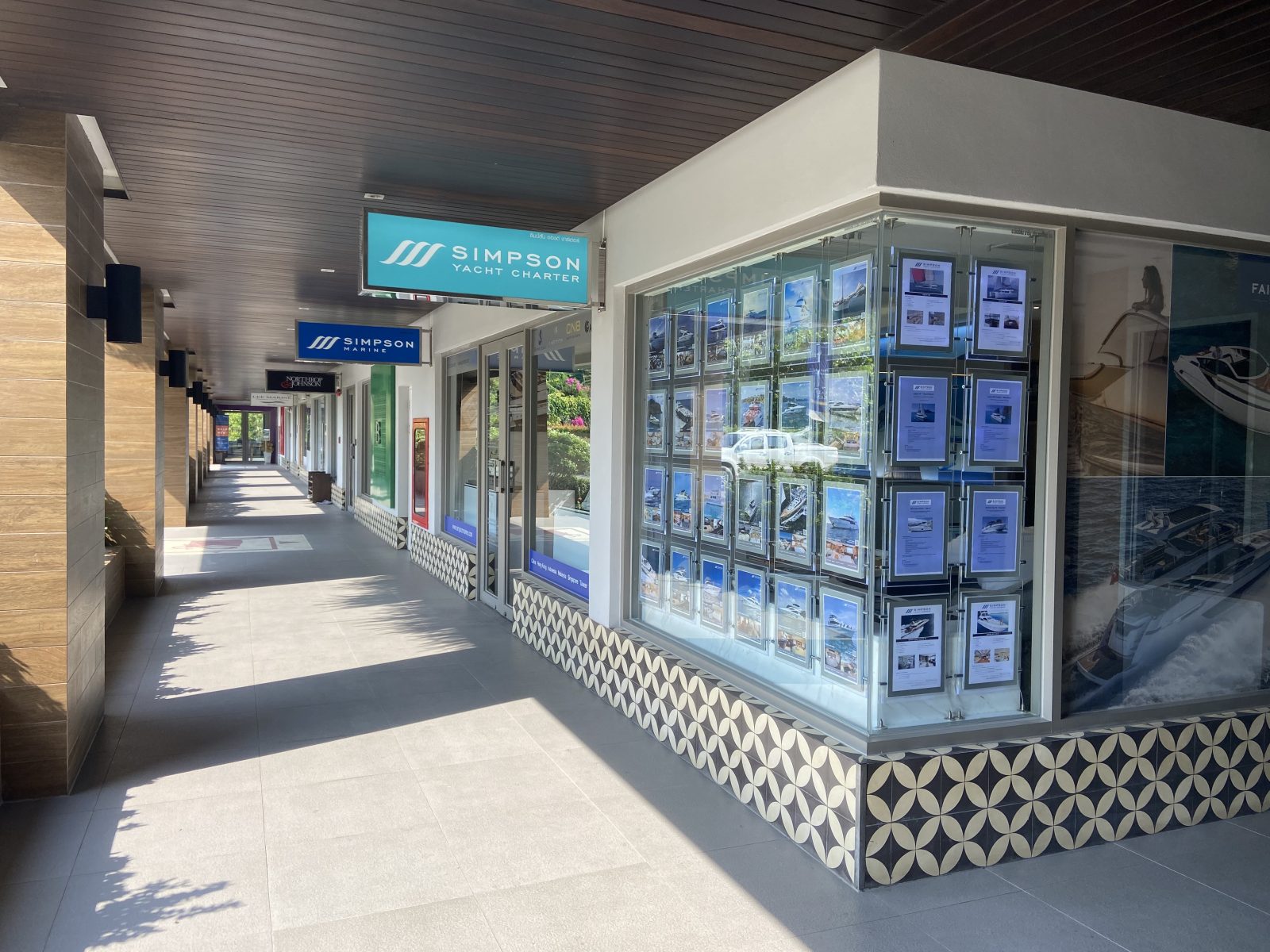 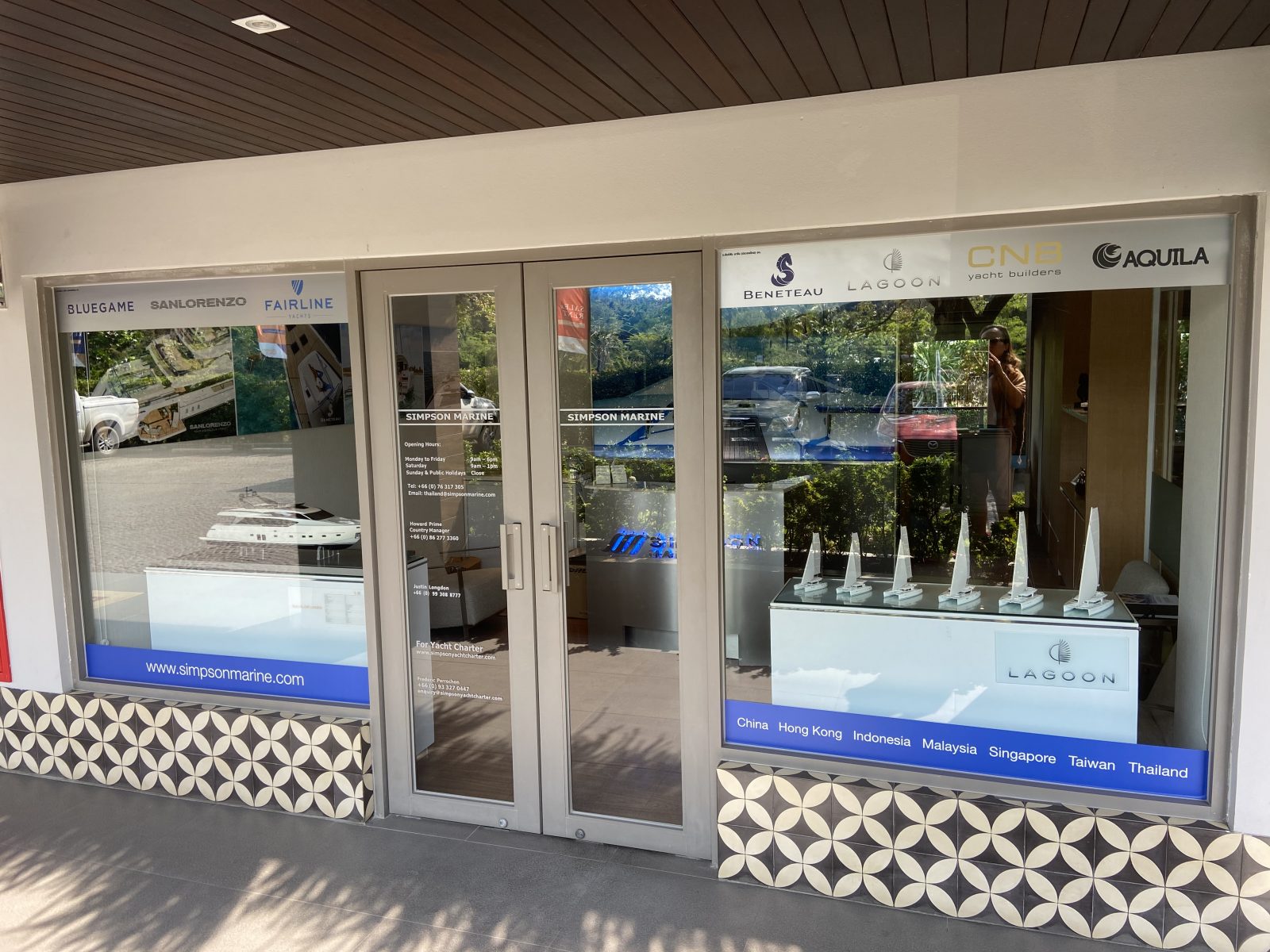 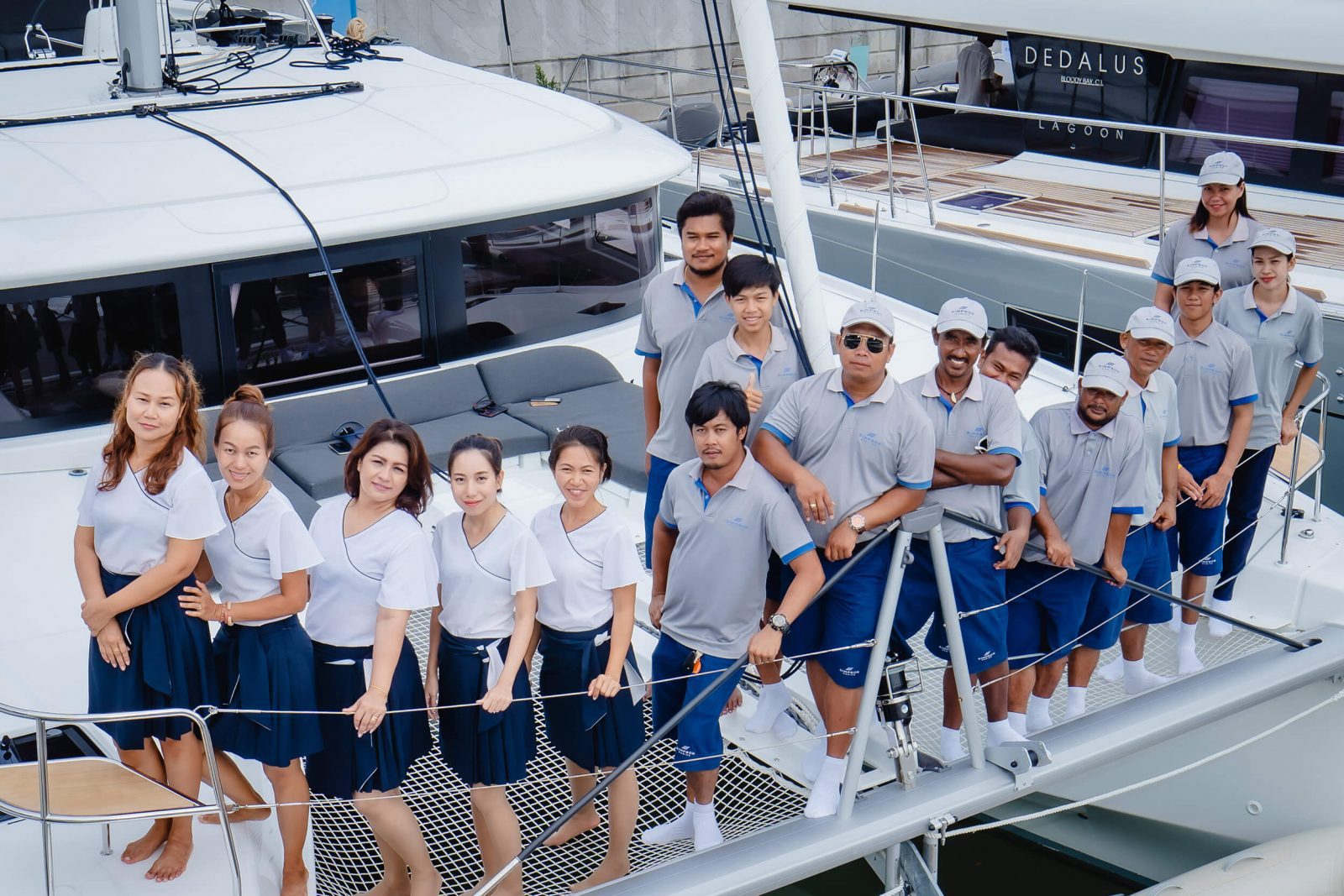 The west coast of Malaysia and Thailand are one of the few truly unspoilt sailing destinations, with numerous attractions for visiting yachts and superyachts who want to enjoy the best of yachting in Asia. It’s no surprise that Phuket is home to many cruising yachts and is also a popular starting point for cruising and charters – for increasing numbers of foreign flagged superyachts, this is their first port of call in Asian waters.

Simpson Marine and Simpson Yacht Charter are ideally located in Ao Po Grand Marina, where our welcoming office and expert yacht brokers team can professionally cater to all your needs, from boat sales and yacht charter to yacht care and after sales service. Whether you are looking to buy a boat or sell your yacht in Thailand, we can assist as a one stop shop solution. Working with our dedicated local office will allow us to connect you with all the best yacht-related services in the country. Our comprehensive regional knowledge and experienced local team of yacht brokers means we can advise you on all the highlights of Thailand’s beautiful cruising grounds and the impressive local yachting infrastructure.

Please get in touch with our team of yacht brokers if you are looking to buy a new boat or brokerage boat in Phuket and Thailand and access our wide selection boats for sale including superyachts, motor yachts, sailing boats, catamarans, weekend cruisers, tenders, and water toys.

You will also have access to the world’s most renowned new boats and yachts for sale from Sanlorenzo, Bluegame, Fairline Yachts, Lagoon, Beneteau, and Aquila Power Catamarans, represented throughout Thailand and Asia exclusively by Simpson Marine.

How can we help?

Yachts for Sale in Thailand

Howard has been around boats and the sea since he was christened in a warships bell as a baby. He has had a long career in the Marine and Automotive industries having worked at sea in many places around the world, also in new boat and brokerage sales and managing large franchised automotive businesses.

Having been educated in both the USA and the UK, Howard went on to live in Turkey and Greece working in the yacht charter market for a global company both at sea and on shore. He speaks a little Turkish and French and continues to work part time as Master 200gt on many different types of vessel both power and sail.

Howard is a keen yacht racing crew, regularly competing during Cowes Week and other UK national regatta’s as Navigator on an X-99 with a highly modified prototype carbon rig. Many successful race campaigns have been achieved, including silverware presented in the Royal Yacht Squadron for a Cowes Week race, first place position.

Whilst Howard’s love for all things nautical is constant, retail operations have always been in his DNA and his career has centered around managing and developing sales / aftersales processes in different retail markets. Howard has a firm client centric approach which only accepts the highest levels of customer care.

Now heading up the Simpson Marine team in Thailand, Howard’s focus is to provide an unparalleled, high level of customer service. Ensuring any potential customer interaction will be dealt with in a swift and professional manner with the highest of attention to detail, applied at all times.

When Howard is not around boats, which is not very often, he may be found long distance running to keep fit and developing his keen cooking skills with a penchant to a perfect English roast dinner!

Hailed from North East of England, Nick has spent his adult life around the ocean. His impressive curriculum vitae includes Helicopter Engineer for the British Royal Navy, Merlin Helicopters, Harrier Jump Jets, serving on the British Flag Ship HMS Ark Royal, to working in the Diving Liveaboard Industry in Phuket and becoming the Sales Manager for 17 Liveaboards all around the world.

It has been Nick’s dream to venture into the yachting industry since volunteering at the Thailand Yacht Show in 2016. His keenness in being part of Simpson Marine brought him the opportunity to join our charter division and was eventually appointed as the Charter Sales Manager with Simpson Yacht Charter.

An avid traveller, Nick enjoys spending long vacations in America, Australia, Asia, and many parts of Europe. While he enjoys spending his weekends or off days hiking, cycling, and diving in Phuket – making the best of his time in the beautiful Thailand waters.

Sten van Aardt is from the Atlantic West Coast of South Africa. He is an avid sailor and waterman who has been sailing in the famous Cape Town South Easterly winds since he was young. He started his yachting career in 2014 seeking a career with a passion after a few years of work in the logistics industry. Since 2017 he has travelled to 28 different countries following his yachting career as superyacht deckhand, charter captain, delivery skipper and ultimately a marine technician for one of the largest charter companies in the world. He has been keen to join the Simpson Group since first being introduced to them at the Thailand Rendezvous in 2018 and found himself in the right place at the right time to finally see his dream come true. Sten enjoys the simple things in life such as camping and a BBQ on the beach with friends. Sten is an avid watersports man and plays rugby for the local Phuket expats team, but ultimately his heart longs for the ocean and the silence of sailing.

Born in Germany to a British military family, Justin travelled to Ghana, West Africa at the age of 7 where he was schooled in the British International School. He then moved to other parts of the world like Belize, Romania, Bangladesh, India and Pakistan with his parents. His love for boats and all things yachting started at a very young age, influenced by his family in Scandinavia who have always owned sailing yacht. It wasn’t until a chance meeting with the sales director from a large yacht brokerage later in his life, that he was offered the opportunity to make a living from boats.

Justin holds a strong curriculum vitae in yacht sales being a broker for over 11 years. His experience in the yachting industry is vast has strong knowledge since his days in Europe. As Justin’s knowledge of large yachts grew, so did his career. Working closely with Simpson Marine’s Thailand country manager, Justin is a Senior Yacht Broker located out of the Phuket office.

Jamie’s passion for the marine world began growing up on the Kenyan coast. Throughout his childhood, he spent a lot of time deep sea fishing, boating and refining his skills in an array of water sports. Education and sport would then take him over to Australia before heading to London where he graduated with a first-class honour in Sport Business Management. He then worked in the sales, events and luxury travel sectors before the pull of the ocean led him to join the largest brokerage in Europe, Ancasta International Boat Sales where he managed and grew one of the offices in the network.

Jamie is now part of the Simpson Marine team in Thailand where his knowledge and experience across the market allows him to assist in the sale and purchase of both new and used sail and motorboats. An active water sports enthusiast and fisherman who appreciates and understands yachting as a lifestyle. Jamie’s ability to find a solution and his aptitude for problem solving makes him an ideal partner in your search, sharing his passion for boats to help you find the perfect fit.

Linda was born and raised in Phuket and had experience working in a luxury hotel industry and aviation industry where responsibility focuses on VIP client management. Being a half British, Linda is fluent in both English and Thai languages. She has been a familiar face to Simpson Marine Thailand being the yacht ambassador to our annual Thailand Yacht Show since 2015.

During her free time, Linda enjoys kayaking and visiting the beautiful shores and archipelagos around Thailand. An individual with enthusiasm in meeting new connections and people, Linda is confident in bringing her high level of customer service and strong interpersonal skill strength to Simpson Marine.

A familiar face in our Phuket office, Bee joined our team in 2008 as an office administrator and after 4 years she was promoted to the role of Office Manager in 2013. She moved from Bangkok and stayed in Phuket for 16 years where she now calls home. She has a Diploma in Accounting from Bangkok Polytechnic School and a Bachelor degree in Human Resource Management from Phuket University. She was worked for luxury 5 star hotels as front receptionist in Phuket and got into yachting by being part of the delivery team from Phuket to Langkawi as well as managing yacht charters in Phang-Nga bay before starting her role with Simpson Marine.

Holding a strong interest and passion in yachting, Rin joined Simpson Marine in 2018 as the Sales Support Executive. The friendly face and voice behind Simpson Marine Thailand office, Rin supports the team’s daily activities from sales coordination, events planning to activation execution. A graduate from Kasetsart University, holding a Hotel and Tourism Management, Rin’s excellent customer relationship and client management skill has been an asset to the company. Rin enjoys spending her time with her family and attending mini courses on yachting, marketing, and listening to podcast. She is fluent in both English and Thai. 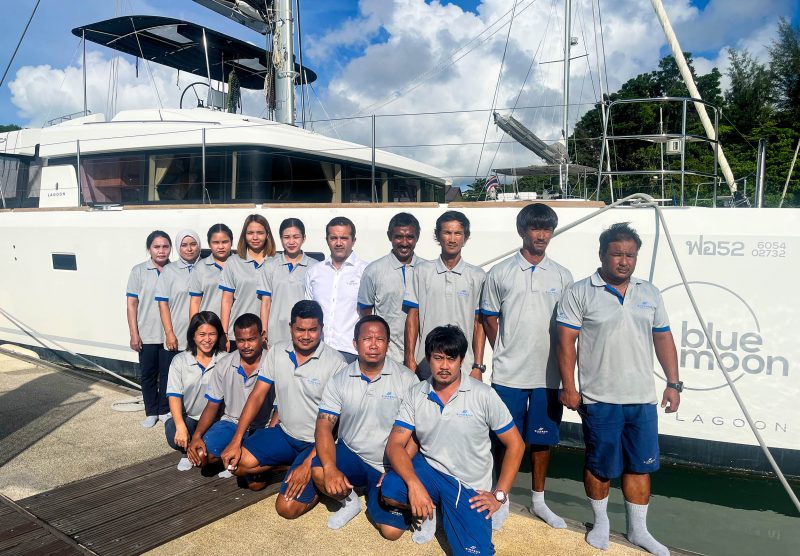 Prior to joining Simpson Marine, Sebastian was the Country manager of Malaysia for Dream Yacht charter. Then he was promoted to the Thailand and Malaysia Country Manager. He joined Simpson marine as the Thailand service manager from 2012 till 2016 and is now back with us with the same position.

He has been a keen and an experienced sailor since high school. Completing his first circumnavigation on CNB72, owned by a friend of his Mathematics teacher. Soon after that, he passed his captain and marine engineer license and sailed around the world for another 7 years on multiples yachts form 50 to 140 feet, alternating between long range deliveries , classic races on old schooners  and luxury charter yachts.

Our team is available to help customers with every aspect of yachting including yacht purchase, after-sales service and technical support. Our extensive local knowledge of Indonesia, Jakarta, Bali and the entire Asian region mean you could not be in better hands. Please contact our experienced team if you are planning to buy a yacht or a boat in Indonesia taking advantage of our wide offer of new sailing yachts, motor yachts and catamarans and brokerage yachts for sale in Indonesia and beyond.