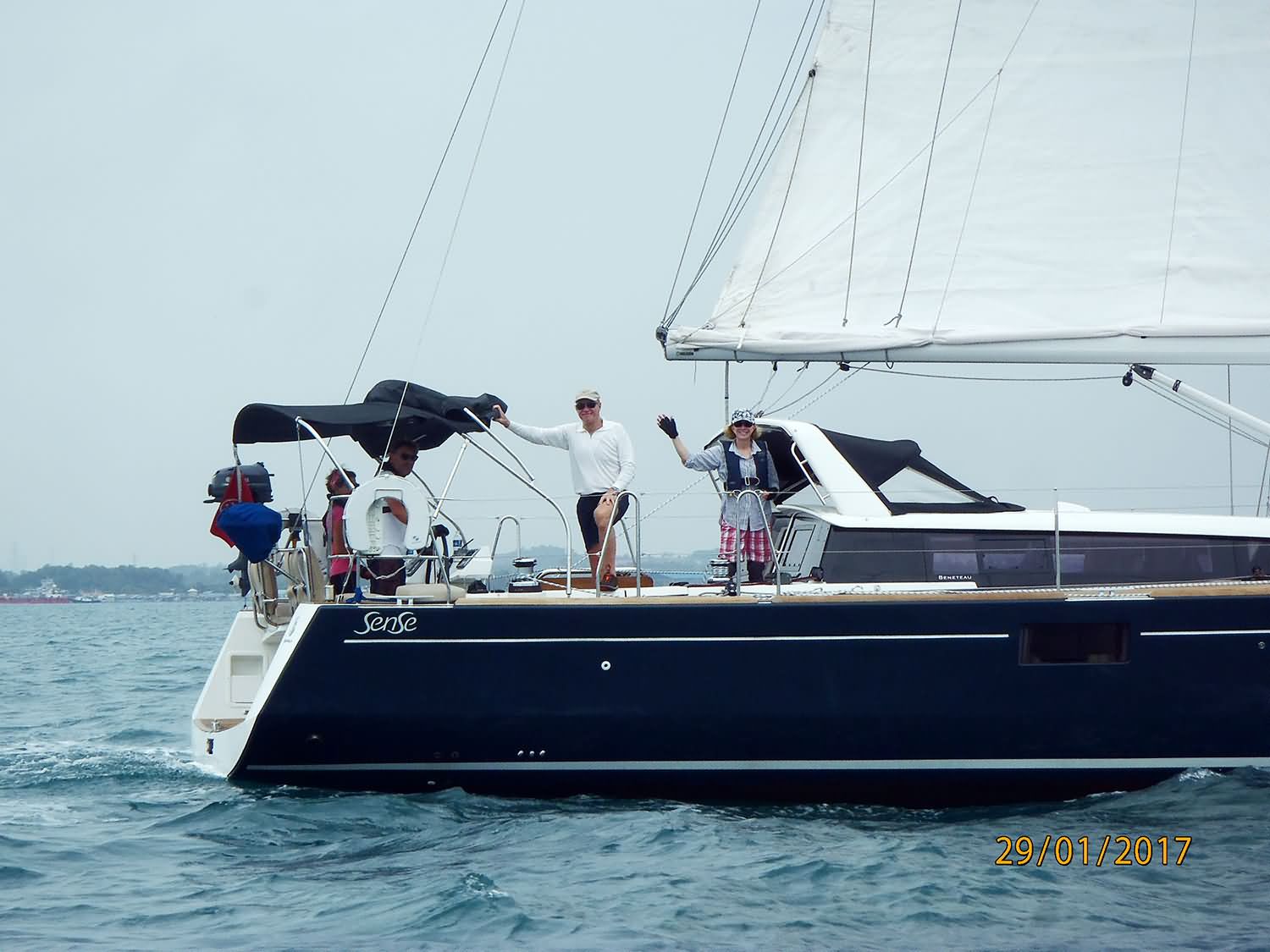 Our Singapore-based brokers, Nick Stratton and Peter Mison have supported the 7th edition of the Neptune Regatta with a Simpson Marine safety boat while helping organisers with all the logistics at each stop. Read Peter Mison’s report on this unforgettable experience. Looks like we will be there next year too!

“Each year one of the biggest sailing events in Singapore is a Race to the Equator called the Neptune Regatta. This 2017 being the 7th year running. When Simpson Marine was asked if we’d like to help sponsor the regatta we gladly agreed and we also offered to help them by offering to support the sailboats with a safety boat. Nick has a very cool 26’ Rigid Inflatable Boat (RIB) similar to what the coast guard and navy use. It’s very fast and seems to be able to go through any weather conditions. So Nick and I with a few friends blasted off on Saturday to meet all the sailboats at the Nongsa Point Marina, Batam, Indonesia where the race actually starts and finishes. The Equator is only about 70 miles south of Nongsa as the crow flies, but as the course island hops all the way down and includes some days of racing among beautiful tropical islands, the total distance covered is more like 300 miles in total. During the briefing on Saturday night it was highlighted that the navigation through all the island chains is very demanding and that it can get very rough in certain areas due to the tides running between the islands that separate the South China Sea from the Malacca Straights. Luckily when we went through these areas we did not experience any of the huge whirlpools.

On early Sunday morning, we went out to set up a buoy across from the committee boat to mark the starting line. All 30+ sail boats headed out and had a wonderful sail down to a midway island called Fish Head Island.  As we left last and ran as the chase boat we missed a small storm that drenched most of the fleet, but as the rain is warm in the tropics, it just adds to the fun. We then blasted ahead to be ready at the finish line for that days racing. Most of the boats have nice cabins to sleep in.  The smaller trimarans slept on their trampolines with awning over them and we pitched our tents on the Island. We were then advised, after getting our campsite all ready, that we had set up camp below the tide line so we had to carry all our tents and equipment to higher ground. This turned out to be very good advice because we then had a cool breeze blowing through the tents and we all slept very well. We had had a wonderful dinner and a lot to drink by the time we hit the sack so that might also have helped.

Monday morning again we were up early to set the stating buoy and after the race got going we had to help out a sailing yacht that had its engine catch on fire. The yacht was OK but the engine was seriously damaged so they had to drop out of the race. We were asked to take four of their crew back up to a small fishing village on the mainland at the bottom of Bintam Island so they could catch a taxi to a ferry to get back home. We then headed south to Neptune Island to catch up and pass the sailboats again so that we could be there for the end of that day’s racing. Neptune Island is a true tropical paradise surrounded by crystal clear waters. It is the base camp for the next few days of racing.

Tuesday morning was a later start with all the boats crossing the start line at the same time heading directly south to the open waters and the imaginary dotted line that separates the northern hemisphere from the southern hemisphere. It was a spectacular sight with most of the yachts and even the small trimarans flying their spinnakers on a7-mile sprint to cross the equator. Again we left last and took some great pictures as we passed through the fleet to the committee boat where we watched the yachts come sailing past. At that point our crew were all instantly part of a very finite group of humans that have crossed the equator in a boat. And we did it in a rubber boat!  After a quick swim just south of the equator, and a bit of celebrating, we headed north again back to our camp on Neptune Island.

That evening we, and all the other first timers, had to go through a rite of passage, more like a university hazing, whereby we were officially changed from being just mere Polliwogs into true Shellbacks. This involved a beach ceremony in the surf where King Neptune rises out of the sea to anoint us, had us drink a weird concoction made from the leftovers from breakfast (and an amble ratio of Mount Gay Rum) and some other strange antics that I’ll refrain from detailing. We all survived and when I realized that the secret sauce was not that bad, (just a bit too spicy) I swallowed it down with a bellowing roar. That then led to an absolutely memorable night of acting like pirates with free flow rum punch and music. Everyone was dancing on the tables. Some continued on partying out on the boats and swimming off the beach until early in the morning.

Wednesday we loaded up the RIB and said goodbye to the sailors as we had to head back to Singapore by ourselves to get back to work. But first we had find some fuel because by this point we were running on fumes.  We managed to get to a very nice little village in the middle of nowhere where we were guided by the island officials (who hopped on our RIB to show us where to go) to a place where fuel had been arranged for us. Once fueled up we headed north into quite heavy seas and a strong headwind. We found it smoother if we held on tight and averaged about 28 knots skipping across the wave tops for a 4 hour run back to Nongsa Point Marina. We quickly cleared customs and were off again for the final 45-minute trip back to Singapore.  Just as we were about to get to the place where we clear customs in Singapore we were pulled over by the Singapore navy. It seems that we looked very suspicious cruising into Singapore waters doing about 35 knots on a military gray RIB, wearing dark clothing and masks over our faces (to protect us from the sun). After they realized that we were just a bunch of crazy Shellbacks they gave us the thumbs up and off we went home.

The moral of the whole story is that if you ever have a chance to join the Neptune Regatta, as a racer, a support boat, or even just a power boat that wants to experience some of the best boating in Asia, I strongly recommend that you don’t miss the next 2018 edition. You will see us there too!

Let us know at [email protected] if you would like us to introduce you to the boating lifestyle around Singapore and in South East Asia.