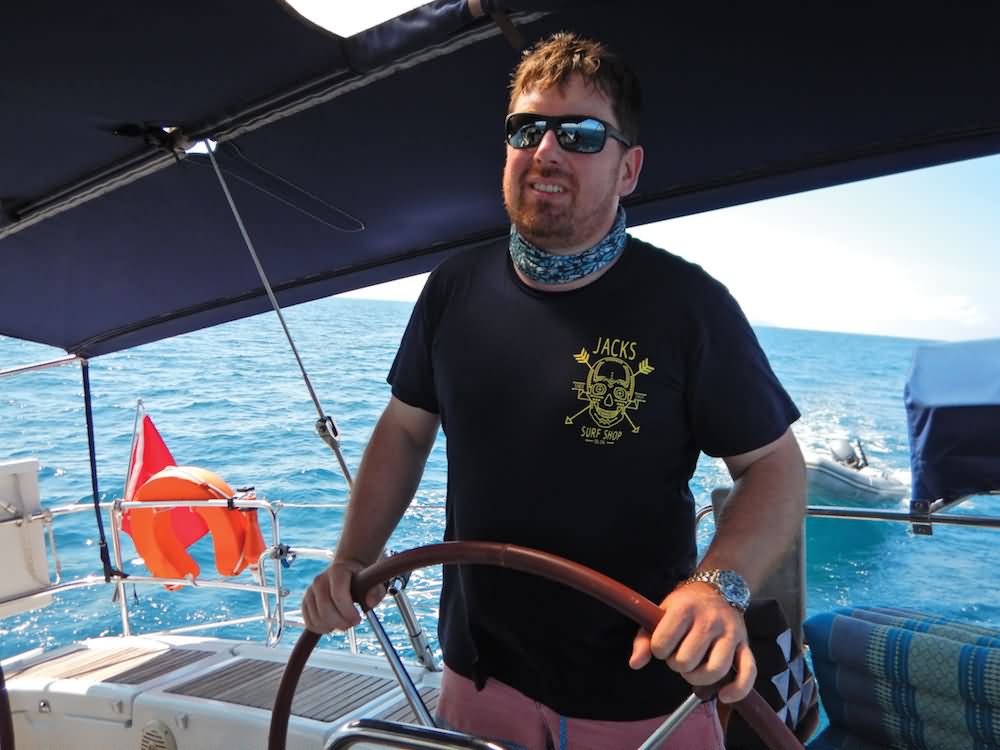 Living on their own boat – Fintan & Jennifer

Sailing a boat at weekends is one thing. Selling your belongings, handing over the keys to your condo and moving on board permanently, quite another. So who better to buy from than someone who has spent over a half decade living on a yacht?

That was the course charted in 2013 by Singapore residents Fintan McKiernan and his wife, Jennifer, when they approached their local Simpson Marine office to help them find their first yacht. There they met Senior Yacht Broker Peter Mison, who was about to prove his experience by making a potentially complicated transaction very smooth for everyone.

One year on, Fintan reflects on what he describes as a “fantastic decision”.

“We lived in a condo for two years and we had been looking at buying a boat so that we could get out and about,” he tells Seabreeze. “We were working on getting our Singapore boating licences and we realised that instead of having a boat and a condo we could combine the two.”

The decision to give up life on land was made easier by the facilities available at ONEo15 Marina Club, which would eventually become home to the couple.

Originally they had been looking for a small boat to use at weekends, but the decision to live on it made their initial research redundant. “We were quite an open book when we met Peter,” says Fintan. “We’d made the decision to live aboard and that gave us a rough idea of what we needed in terms of space.”

The two settled on a sailboat so they could use it as often as they liked without worrying about fuel bills.

It proved to be perfect timing as another customer of Peter’s, Richard Lorentz, who was also berthed at ONEo15 Marina, had decided it was time to upgrade his Oceanis 50 to a larger Lagoon 450. Although Richard was keen to sell, it was imperative that the terms were right. When he’d sold his previous boat it had taken around five months for the replacement to arrive, forcing him into a serviced apartment, something he was determined to avoid this time around.

Peter helped negotiate a deal which allowed Richard to remain on the Oceanis 50 until his new Lagoon arrived, providing both parties with an ideal solution. The timing had to be just right as Fintan and Jennifer would also vacate the lease on their condo to move aboard the sailboat.

It was all complicated by the fact that banks in Singapore will not disperse funds until a boat is physically in the city and the new Lagoon would have to be paid for in full before it departed France. With Peter’s expert guidance he arranged for Simpson Marine to provide a “bridge loan’ while the catamaran was in transit from France.

“It all worked out perfectly,” says Richard. For the McKiernans the adventure was just beginning. “We had a bit of learning to do to calibrate our lifestyle,” says Fintan. “We sold most of our furniture and gave the rest away to charity.

“We probably trimmed our belongings by 75-80% and we honestly don’t feel that we miss anything: on the contrary we realised how much junk you can accumulate when you have the space.”

The two keep everything ready to sail (a “conscious decision” says Fintan) and can be out of the marina in about half an hour should they wish. Of their many cruising trips, it was the rendezvous to the Malaysian island of Sibu organised by Simpson Marine in June 2014 that really stood out. “We dropped our anchor in 15m and I remember watching it go all the way down in this crystal clear water,” he says.

“It’s only two days’ of sailing and you’re in a dramatically different place. You can’t imagine a more different environment compared to the fast pace of Singapore.”

Living on a boat is not for everyone, but Fintan says they have never looked back. “It’s been a great experience so far,” he says. “You can wake up on a sunny morning and you’re already on the water. You check the tides and just decide where to go.”