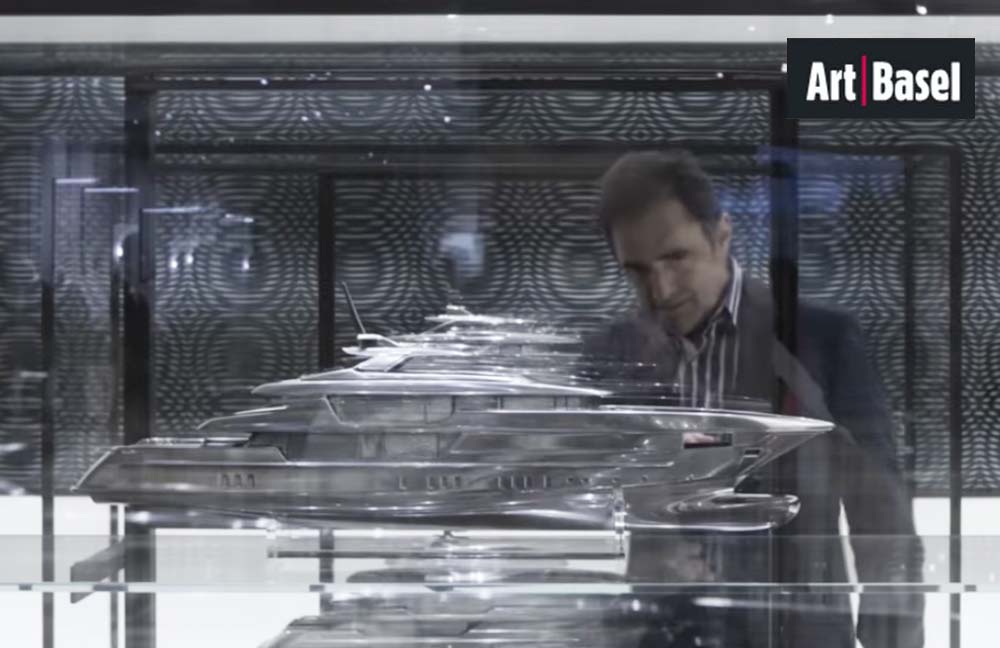 Sanlorenzo has continuously pushed its boundaries over the years, embracing languages and expressive forms belonging to similar worlds such as design and art to benefit its work in yacht building. The close link between Sanlorenzo and art finds its roots in the innovative vision of CEO and Chairman Massimo Perotti who has led the company to experiment with new and unexpected connections. This ground-breaking approach has helped the company to develop new points of view on the world of yachting and create its stunning superyacht designs.

For the occasion of Art Basel Miami Beach 2018, Sanlorenzo chose to present itself in the Collector Lounge, paying homage to a renowned Italian artist Alberto Biasi, one of the main representatives of optical kinetic art. A captivating installation was created by the company’s art director Piero Lissoni in collaboration with Galleria Tornabuoni Arte.

Lissoni’s project interpreted the poetry of “Gocce” (“Drops”) by Alberto Biasi, part of the “Rilievi ottico dinamici” (“Optical-Dynamic reliefs”), laminar structures in contrasting colours superimposed so as to produce a visual event that changes depending on the movement of the spectator.

The Sanlorenzo lounge was thus transformed into a luminous installation which, by reproducing the “Puzzle” artwork displayed right on the walls in the space, replicated and amplified the optical effect conceived by the artist. The work moved with the visitor who thus became an “actor” jointly involved in it, surrounding him and evolving according to his point of view.

Displayed in sequence in glass display cases along one side of the lounge were metal models of the Sanlorenzo Superyacht. These models reflected the visual patterns of the art piece, changing and moving with it in an emotional and perceptual dynamism, as told in the artist’s words:

This is what appears in the “Gocce” series (“Drops”): the magic of circles is patiently evoked on the double structure which has been diversified in the perceptive interplays between background and surface. Based on the rhythms of the plates, which begin to move, it calls to its presence new circles of shadows which become dynamic, rise and drop in relation to your movement to the left or right, or walking horizontally.
This work, which lives and moves with you, evokes a sense of wonder which reminds me of certain moments of my experience with nature, contemplative movements which fascinated me: “A drop fell on the quiet expanse of a pond? Or a miniscule air bubble appeared on the surface? Whatever the cause, my eyes concentrated on the liquid wrinkle and on the luminous reflection: my mind saw the flow of the circle, its expansion and disappearance…”. (Alberto Biasi)

Piero Lissoni’s installation thus once again shows the relationship between Sanlorenzo and art and the ability of artistic language to tell the company’s story according to new perspectives.

Next up for Sanlorenzo and the Art Basel collaboration is Art Basel Hong Kong, Asia’s most prestigious Art Fair, which is to be held on 29 – 31 March 2019 in Hong Kong. To request your VIP Pass and visit the  Sanlorenzo Lounge and the show, please contact us at [email protected]