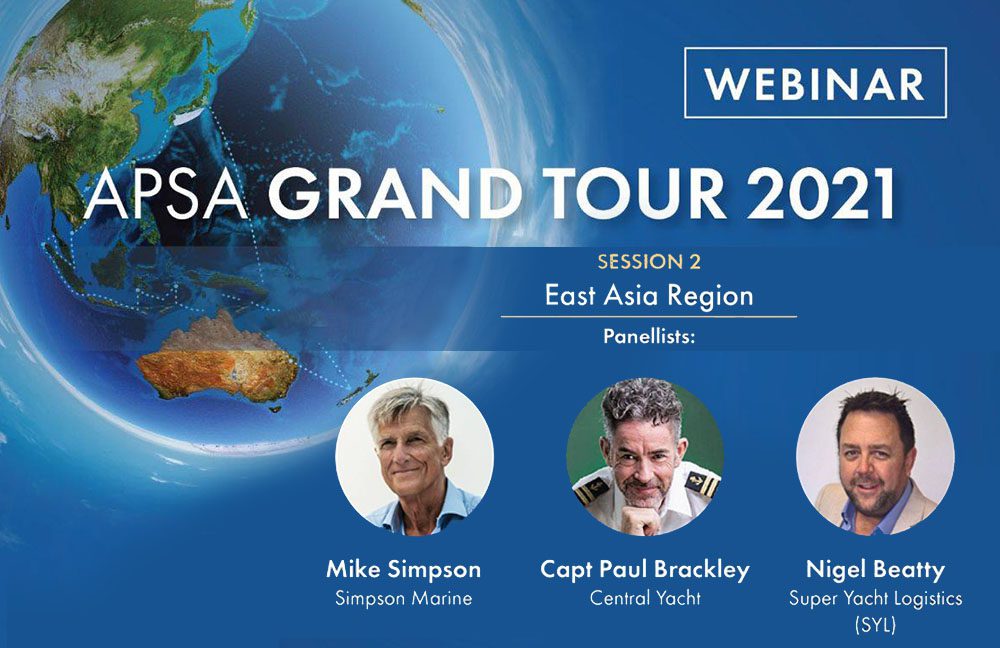 As one of the earliest members of the Asia Pacific Superyacht Association (APSA), Simpson Marine with Mike Simpson were delighted to be invited as one of the panellists in APSA’s Grand Tour webinar presenting expert updates on the current situation of the superyacht industry in Asia-Pacific region.

Nigel Beatty (Super Yacht Logistics Japan/YACHTZOO Japan) presented a fast-paced summary of big boat yachting in Japan. From Hokkaido to Kagoshima is 1,800km, and Ishigaki is a further 1,000km south. That’s the difference in distance between Newfoundland and the Bahamas – a substantial climatic range, meaning that in Japan there is, indeed, cruising all year round. The north west coast is something of an adventure land, and a properly exhaustive cruise in the Inland Sea could extend over months. For warm water cruising, volcanic islands, coral reefs and spectacular diving, head south to Okinawa and beyond.

Japan imposes precious few restrictions on visiting yachts, and when you go ashore the sights, sounds, food, culture, sports, history, people and scenery of this clean, safe, and friendly country are already legendary. Even better, the shipyards are sparkling clean, the quality of workmanship is absolutely first class, imported parts can be easily moved around the country, almost every sizeable port (there are lots) is a port of entry, and crew can come and go with relative ease – visa, waivers, and passes are not a problem.  “Come and visit Japan,” says Beatty.

Next on the programme was Captain Paul Brackley (Central Yacht) who is quite right when he said “most people don’t know anything about Taiwan”. The island formerly known as Formosa has good opportunities for cruising, but its real strength is in repair and refit facilities. Indeed, Taiwan is the fifth biggest builder of superyachts in the world. Some of the smaller yards are not so glamorous in appearance, but Taiwan permits easy access for foreign specialist contractors, and the skill level among local subcontractors is first class.

Mike Simpson wrapped up the series of presentations, and the founder of Simpson Marine (1984) talked about Hong Kong, the Greater Bay Area (GBA), Hainan, and southern China.  “Hong Kong could be the Monaco of the East, if the government would only wake up to the possibilities…!” he said. “There is much more to Hong Kong than the bustling financial and business hub, high rise buildings and great shopping for which the city is generally known overseas. Hong Kong has a beautiful, hilly coastline, great hiking trails and over 250 islands to explore.”

“Although for many years there has been a lack of berthing for yachts of all sizes, there are now a few berths available for visiting superyachts at the newly opened Lantau Yacht Club. Port entry and crew regulations are straight forward with cruising in Hong Kong waters allowed once permits and crew with valid local licences are in place. Although superyachts are recognised as non-commercial vessels, there is still a lot to do to make regulations easier for visiting superyachts and crew. The GBA  is an administrative construct of the China government, and consisting of Hong Kong and Macau and nine cities grouped around the Pearl River delta.

Cruising in China is currently quite complicated. For example, if a motor yacht is sold into China 42% tax will have to be paid. Moving from one province in China to another is subject to inconsistent inter-province cruising regulations. Not only are the rules unclear, they change. Generally, there is a shortage of qualified crew in China, and there are strictly limited repair and refit facilities with the exception of Kingship Marine and HeySea Yachts both of which have shipyards in southern China. Hainan is scheduled to be the main boating hub for China, and the island has been designated as a Free Trade Zone, with a particular emphasis on the city and surroundings of Sanya region opening up to “marine tourism”.

There will be no import tax on boats arriving in Hainan, and there are all sorts of financial incentives for companies and businesses opening offices or ancillary boating facilities there. Simpson Marine already has an office there at the Serenity Coast Marina. “Hainan has huge potential,” says Mike, “but the rules are not entirely clear yet.”

Session 3 of the APSA Grand Tour was held on 26 January and focused on Southeast Asia (Thailand, Singapore and Indonesia).

To discover more about APSA and their mission, please visit their website.