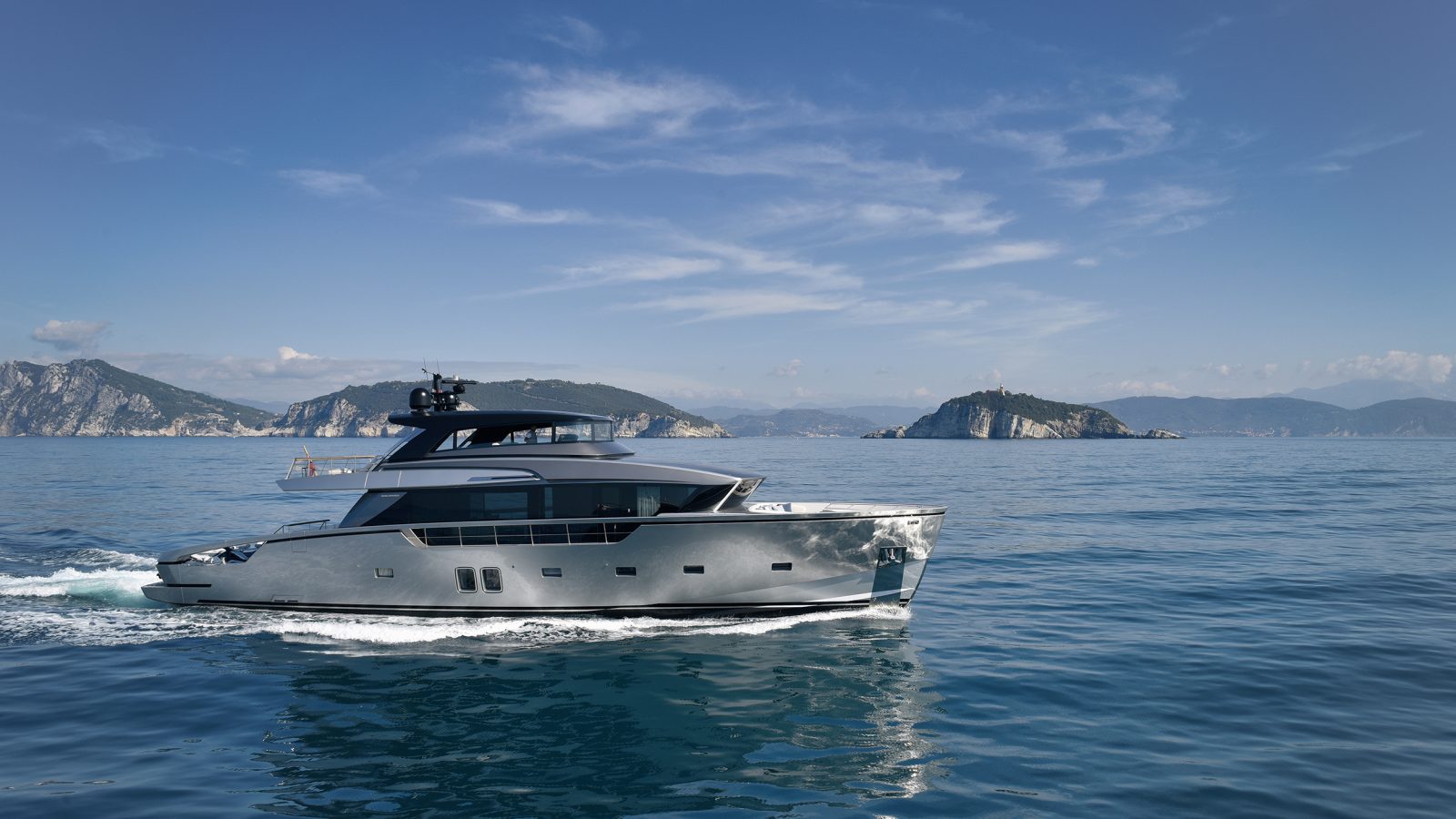 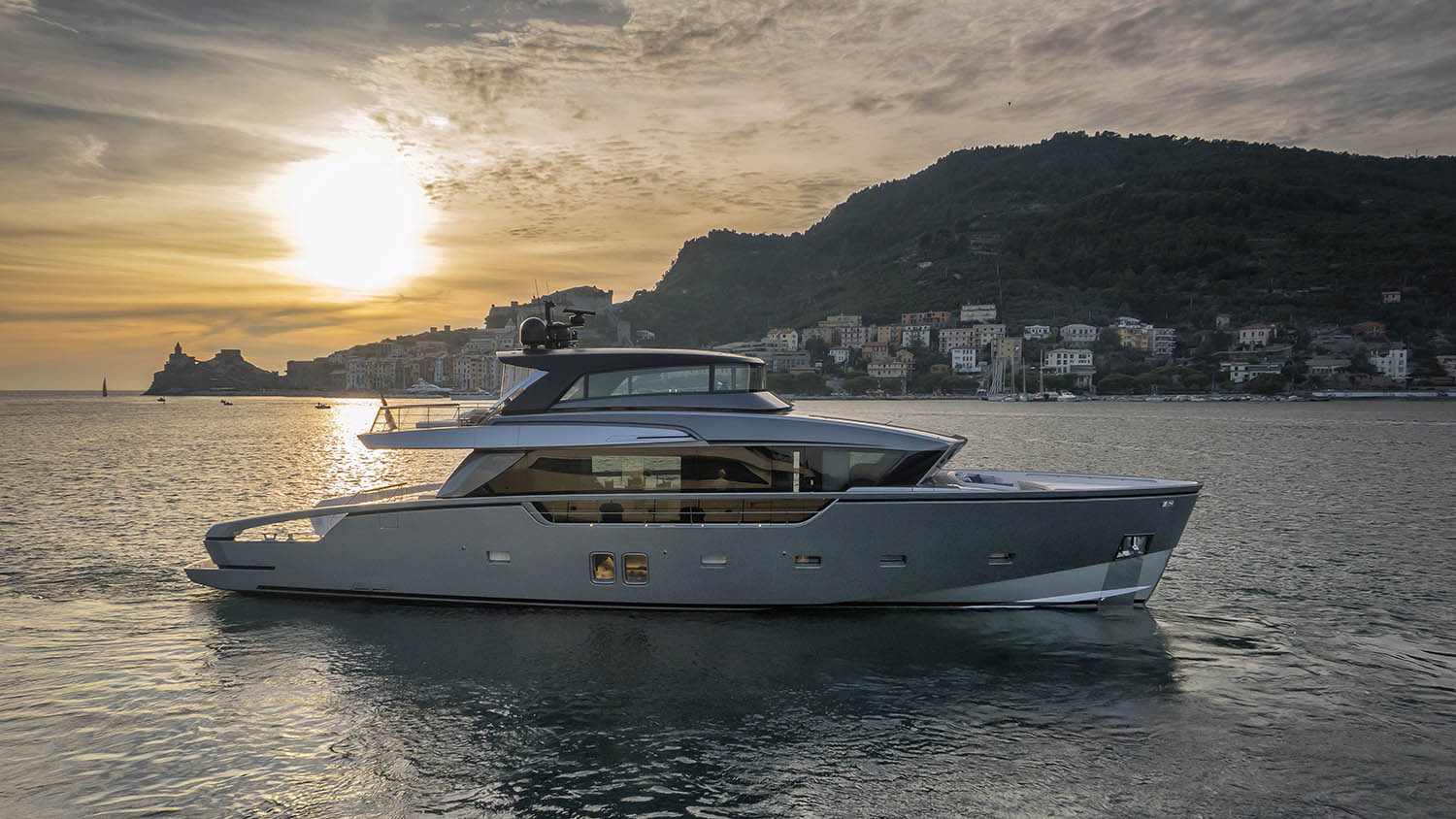 The SX88 is a new 27 metre cross-over motoryacht, presented by Sanlorenzo in September 2017 and already very much appreciated by the clients with several units sold before her official premiere. Interior design of the first hull has been done by Piero Lissoni, one of most famous interior designers in Italy. Designed with a younger generation in mind, and offering a huge amount of space for its size, it is no surprise that the SX88 has been so well received. Sanlorenzo describes the boat as a “social” yacht which offers a new way to live life on board.

The revolutionary SX88 offers wide open spaces and large glass windows, assuring an effective and optimised relationship between interior and exterior, required by the most experienced Owners.

The high, seaworthy bow lowers toward the stern streamlining all the mass of the yacht, but at the same time giving her impressive abilities as an all-weather vessel. The superstructure is marked out by the widest glassed surfaces and is painted in dark shade to reduce the volume perception and to balance the “full” of the superstructure and the “empty” of the windows.

As on a large superyacht, the only steering position is on the upper deck, the fly bridge, protected by a windshield that can be closed by side saver windows and when needed by glass panels or – as optional – by a user-friendly rigid structure. Thanks to this solution, the lack of a helm allows the fore area of the main deck to be totally free and can be arranged as an Owner’s cabin or remain a wide open multi-functional space.

All the main deck is spread out flush on the same level and can be opened – according to the different layouts – from stern to bow, creating a true open space loft, a never-before-seen feature on a 27m yacht. The fore area of the main deck is fully equipped and furnished to offer a relaxing and functional living area with double L shaped sofas with coffee tables and an extended sunbathing surface, a difficult to find solution on a 27m, with the possibility to directly connect with the interior.

The stern area is just as astonishing. The level of the “beach club” area is five steps lower than the main deck and can accommodate a 15ft/ 4.5m tender, a Jet ski, Seabob, Jetlev Flyer, Wakeboard, Stand Up Paddle. The crane to move these watercrafts is cleverly and elegantly hidden in the prolonged profile of the handrail, with no disturbance to the eye-catching SX88 outline.

Upon deploying the watercrafts, the wide stern area offers 30 sq. m of beach club space, shaded by parasols and furnished to enjoy life at the water’s edge.

The crew quarters is just forward of the engine room that, thanks to the Volvo IPS 1200 powerplants, is moved much astern compared to the position of traditional in-line transmissions.

Particular attention was given by Sanlorenzo to the environment’s sustainability, with specific care and sensibility to the environment where the yacht is operating and the one where she is built. The SX88’s construction process is based on eco-friendly procedures and materials developed by Sanlorenzo. Thanks to the combination of high power lithium batteries and new lighting technologies, energy management systems, efficient thermal insulation and window glass, the SX88 can use all systems on board for 4 to 8 hours at “zero emissions”. Thanks to these eco-friendly features, Rina awarded SX88 with the Green Class.

On the first unit the interior decoration is cared for by the famous Italian interior designer Piero Lissoni. Hull water lines were developed by the worldwide renowned Lou Codega.

SX88 represents a successful and clever combination between classic flybridge motoryachts, a segment in which Sanlorenzo is a world leader, and the recently expanding Explorer class, in which Sanlorenzo has great success with the award-winning 42m 460 EXP.

The SX88 is built and assembled in the traditional Amelia (La Spezia) shipyard where Sanlorenzo has its headquarters. She was officially introduced to the world and press during Cannes Yachting Festival in September 2017.

SX88 is a product containing myriad “Firsts” by Sanlorenzo, all resulting from constant work of the shipyard’s R&D department: